I am a Bernie Sanders-supporting registered Democrat (check the voter databases in Iowa and New Jersey); yet, I never hated Donald Trump, even as everyone around me did. My wife and I stopped talking politics on the morning of November 9, 2016 and my mother-in-law to this day only refers to him as “Number 45” or “Turdface.”

But I see beyond his fake tan and broken syntax and recognize some of the good things Trump did over the past four years: He reset some bad trade agreements. Told our European allies it was time they chipped in their share for mutual defense. Oversaw an unprecedented surge in small business growth. And, most importantly, helped expose the falsehood of the Washington, D.C. trope that large, ceaseless federal budget deficits are inflationary and need to be dealt with through deep cuts in entitlement and discretionary spending. If there is one thing Donald Trump is good at, it is running up debt and still being rich.

Finally, I always knew Trump wasn’t a Russian tool (as that whole three-year, media-fueled hullabaloo was the Oxford Dictionary definition of ‘fake news’). The Washington establishment wanted to discredit Trump from the moment he was elected and the Russiagate story was the perfect pulp fiction to do it.

Truth be told, I was entertained watching Trump annoy the news media. They kept telling me Trump was a liar but that’s not what I saw. Trump was not a fabricator of facts — he was simply a CEO who could only regurgitate new information after he had dumbed it down to a point where it was unrecognizable as discernible fact. That’s not lying. That’s called being wrong. There’s a difference. A big difference.

Kevin Weinberg, a 30-something computer programmer, writer and anime aficionado, posted on social media one of the most honest postmortems I’ve yet seen for soon-to-be former President Donald Trump:

“If you love Trump as much as I do, don’t riot. Don’t loot (not that I need to say it, as our side never does this). Accept Trump’s sacrifice for us. He destroyed his life, his business, and his future for his country, so that we could save our Constitution by ending the attack on our courts. I am so sad to see President Trump lose (which he probably will). But we should honor his sacrifice. He changed politics forever.

Republicans are now trending ‘big tent.’ Hispanics are rapidly switching teams. Each election we (the Republicans) gain more Hispanic and Black support. Liberals will eventually be the party of white women with college degrees in gender studies.”

Sure, I could quibble with a couple of assertions in Mr. Weinberg’s elegy, but his basic point mirrors the central sentiments I’m hearing and reading across the Trump universe today (for which I now paraphrase): We are sad, but we believe Donald Trump stood for something that is not fairly represented in the national media or among political and economic elites: The American economic and political system is designed for the benefit of the few, not the many.

If I may interject, Donald Trump utterly failed in changing that inequity dynamic, even as I remain sympathetic to the guiding belief that I believe motivates most Trump voters: The American political and economic system doesn’t work for most Americans.

The election of Joe Biden fails to address that problem on every meaningful level. In fact, I think he will significantly set that project back. A Biden administration is a regression-to-the-mean that will re-empower the same forces in the Barack Obama presidency that engineered that fastest growing wealth gap since the Reagan years. Every problem can be solved by government-funded tax credits, block grants, or low-interest loan programs that do more for the balance sheets of corporate America (and the value of stock holdings among corporate executives) than for the household budgets of average Americans.

I am too cynical, but experience tells me, for most of at least, happy days will not be here again under a Biden administration.

Joe Biden is the autonomic reflex reaction of the American people to the perpetually embattled Trump presidency. However, the realities that created the Trump phenomenon in the first place –increased wealth inequality, anxieties over immigration, unbalanced trade agreements, the continued economic marginalization of working class Americans of all races and ethnicities, and a growing sense that the U.S. is in decline relative to the rest of the world — are stronger than ever.

The November 3rd election was an anti-Trump vote, but it in no way represented an endorsement of the Democratic Party, its ideas, or its desire to return to “normal times.”

To the contrary, the Republican Party’s core values remain the ideological fulcrum points for most policy debates in Congress — federal budget deficits are bad, what is good for corporate America is good for Main Street, U.S. military interventions are always motivated by good intentions, etc. — and is in an ideal position to stop any substantive legislation the Biden administration might propose.

As I said in a recent column, “The status quo won in a landslide on Tuesday.” Under Biden, the U.S. will keep bombing the same seven countries we bombed under Obama and Trump. The wealth gap will continue to grow. The U.S. will continue to have an inadequate health care system that denies millions of Americans access to needed health care and leaves millions more vulnerable to financial bankruptcy. And the planet will continue to warm at an alarming rate (see Figure 1 below), even after the U.S. rejoins the Paris Climate Accords. 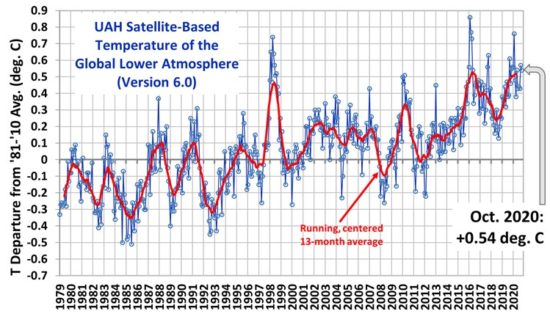 Nobody that cares about this country should be happy about with the status quo.

I will not miss Donald Trump as I am sick of the network news’ daily diet of “What stupid thing did Trump say today?”

However, if we are ever going to face the real problems in this country — the problems that gave rise to Trump in the first place — the ‘Chicken Little’-hysteria that surrounded the Trump administration will need to be replaced by something more nuanced and intellectually honest — and, therefore, less attractive to news audiences.

Which is why I have no illusions that anything will actually get better under the next presidential administration, even if the news network anchors (not on the Fox News Channel) insist otherwise.