The signs are starting to appear…

The American people may be growing weary of the Trump-Russia story.

The first sign is what scares media executives the most…TV ratings. It’s the canary-in-the-mine indicator.

Its just one month and MSNBC’s weekday evening schedule still garners more viewers than a year ago. But trends start somewhere.

The second sign of Russia-fatigue is the recent sustained increase in Donald Trump’s job approval ratings. As of March 23rd, the RealClearPolitics.com average was at 41.6 percent. 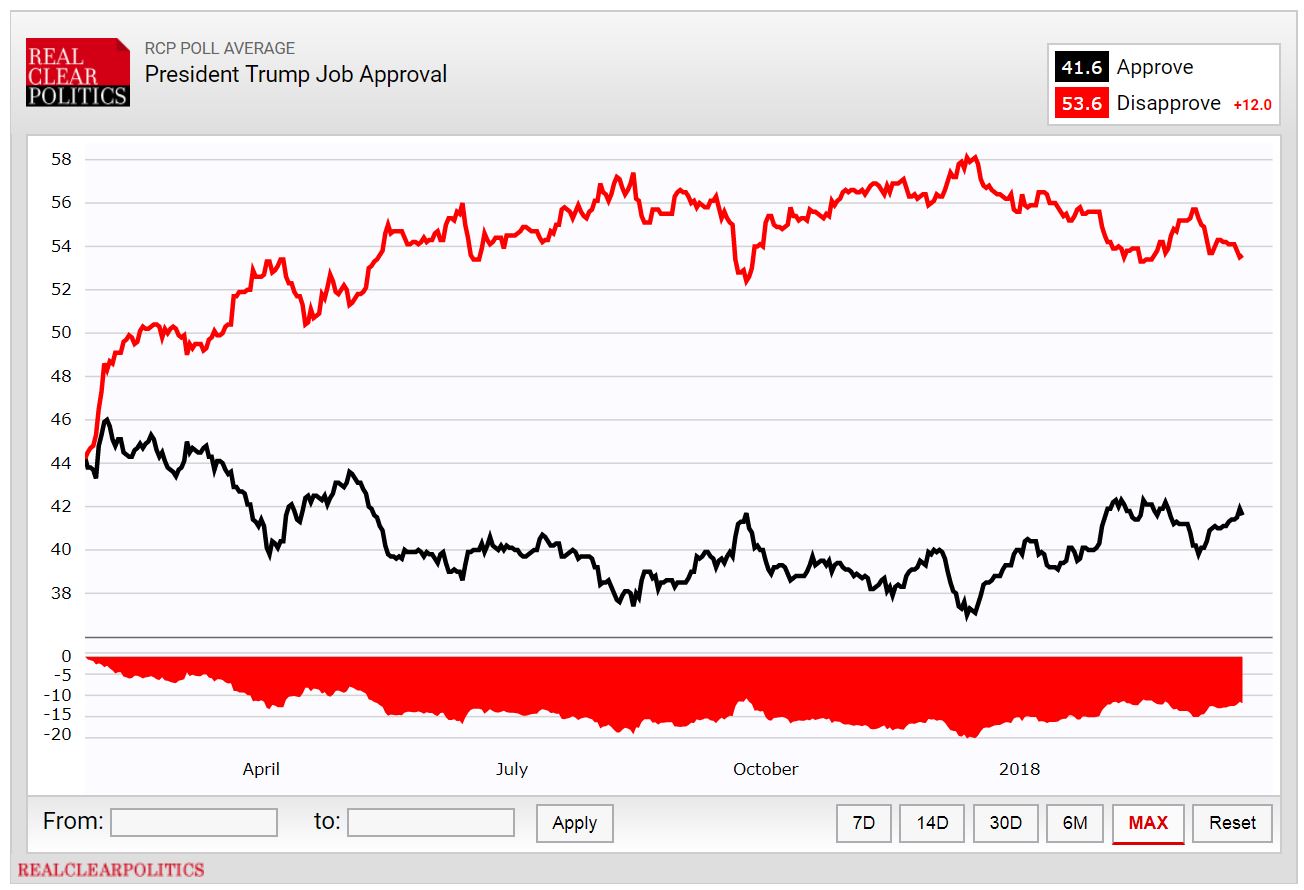 He’s not exactly popular. In fact, he remains historically unpopular for this stage in a presidency. Yet, for Trump, 41.6 percent looks good. He is well off his all-time lows in mid-December 2017, when he had 37 percent approval, and if the trend were to continue through October, the GOP would have a decent chance of keeping control of the U.S. House.

Trump is too unpredictable to justify any prediction that bold. But it is also true he is in the midst of his presidency’s most sustained increase in job approval. Hardly evidence that the American public is losing faith in his presidency over the Trump-Russia probe.

And the third sign of Russia-fatigue should scare establishment Democrats the most. Progressive Democrats are openly starting to wonder if the Democrats’ obsession with Russia isn’t designed to distract Americans from the real issues that affect their lives: Jobs, health care, college costs, income inequality, etc.

During a March 19th live-streamed discussion of income inequality, Vermont Senator Bernie Sanders and filmmaker Michael Moore both highlighted the excessive coverage given to the Trump-Russia story.

“These are all shiny keys to distract us,” said Moore during the broadcast. “We should know about the West Virginia (teachers) strike. What an inspiration that would be. But they don’t show this, Bernie, because, what would happen if they did?”

The American people might realize progressives can take collective action in conservative states like West Virginia and actually achieve progressive policy outcomes supported by the majority of people in those states.

While always at risk of sounding like Jan Brady with their “Russia, Russia, Russia” lament, progressives are justifiably insecure and a little paranoid right now. Their own party’s leadership, led (on paper at least) by Democratic National Chair Tom Perez, is at war with them.

In October 2017, Perez purged a number of the party’s progressives of their at-large delegate status or leadership positions, while appointing dozens of new members, many of whom were Hillary Clinton campaign veterans or former corporate lobbyists.

Perez’ thinly-veiled message to progressive Democrats: We don’t need you to win elections.

How can Perez and the Democratic establishment be so confident? Because they have the major news outlets doing the heavy lifting for them. Just keep hammering the American public with Trump-Russia collusion stories, throw in a little ‘Facebook is selling your private information’ fear-mongering, and add in an extra helping of ‘The Parkland kids are going to end gun violence in this country,‘ and the American public won’t know Bernie Sanders from Colonel Sanders.

That’s the hope of the Obama-Clinton wing of the Democratic Party, at least.

The DCCC was even so bold as to publicly release opposition research against progressive Democrat Laura Moser in the primary race for Texas’ U.S. House District 7. Despite (or because of) the national party’s efforts, Moser finished second in the Houston-based district and will face establishment candidate Lizzie Pannill Fletcher in a runoff election on May 22nd.

When will establishment Democrats learn? Let your party’s voters decide who should run in the general election. If you had done that in 2016, we’d probably be talking about President Sanders right now.

Will the establishment’s strategy work? It will, of course, depend on the final disposition of the Mueller investigation. Even with CNN and MSNBC’s insistence that the Mueller probe is closing in on Trump fast. The verifiable public evidence suggests otherwise.

Writes The Washington Post‘s Ed Rogers: “Special counsel Robert S. Mueller III and his team of investigators appear to be aimless and are wandering, Democrats are grasping at straws and President Trump is lawyering up. Going by what information has, so far, been made public, there is no collusion with Russia to be found — at least on the part of the Trump campaign. And with obstruction of justice difficult to establish, Mueller’s plate seems to be full of side dishes but no entree.”

Rogers may be engaged in a bit of selective observation; but, in the end, he may be correct to this extent — the public evidence of a conspiracy between the Trump campaign and the Russians is insufficient, if the goal is to impeach and remove a sitting president.

However, if the goal is simply to weaken a president and his party for his entire term, the Trump-Russia investigation is right on schedule.

The problem the establishment Democrats risk is that, by focusing on Russia, the American people are bound to notice the party’s failure to address the serious problems that continue to fester, particularly in parts of the country Hillary Clinton has decided are too ‘backward’ to belong in any future Democratic Party coalition. She denies she said that, of course, but we have it on tape (here).

And as signs add up that the American public is ready to move on from the media’s Russia obsession and on-going rationalization of Hillary Clinton’s defeat, the establishment Democrats may want to reconsider the marginalization of their progressive brethren.

Trump’s recent rise in approval has occurred despite a daily diet of insults, lies, denials and threats. His congenital lying is baked into public opinion already.

More distressingly, his administration accomplishes little of substance at home (except explode the national deficit) as it seems to be committing this country to a wider-scale Middle East war at the behest of our allies, Israel and Saudi Arabia.

The neocon’s liberal sounding board, The Washington Post, is already softening up opinion on the Left to the idea of a larger U.S. military commitment in Syria.

As if it was not enough that 17 years in Afghanistan has given this country little to show for it, and a 10-year engagement in Iraq has only created an Iranian client state, now the Trump administration quietly, with congressional Democrats’ apparent complicity, positions our military for a renewed war on Syria’s Assad and a potentially larger conflict with Iran. All this while Saudi Arabia uses American weapons to target Yemeni civilians which only pushes Yemen further into chaos and despair, ensuring a whole new generation of young men and women dedicated to hating the West.

It probably kills Hillary Clinton that she’s not the one leading the country into this regime change war against Assad. It was her brainchild after all.

But, instead, we have Trump. And with his replacement of H. R. McMaster with John Bolton as his national security adviser, the Trump war cabinet is taking shape. If trends continue, we will be in a hot war with Syria, Iran, or North Korea before the midterm elections. Hopefully not all three.

But we don’t hear bupkis from Democratic leadership on the increased likelihood of this next U.S. military adventure. Two lone voices in the U.S. Congress have credibly sounded the alarm on what the Trump administration is doing: Kentucky Senator Rand Paul and Hawaii Representative Tulsi Gabbard. Not coincidentally, neither is loved by their party’s leadership.

And the news media? They are too busy covering Russia, the story that will keep on giving and giving, especially if CNN and The New York Times are allowed to make up a few things now and then. If being glorified stenographers for the U.S. intelligence agencies and the “deep state” means getting a few facts wrong, what do they care as long as profits stay strong?

But the signs are there that the news media’s latest gilded age may be almost over.

The American public grows tired of the Trump-drama. They may not flock to Trump’s defense as they did with Bill Clinton in 1998, but they may hold the Democrats as equally responsible as the GOP for the absurdity of this presidency. They may even vote him back into office if the Democratic Party’s leadership continues to fixate on Russia (and now gun control) instead of the ‘bread-and-butter’ issues that matter most to Americans.

Imagine that…six and a half more years of President Donald Trump. And you can thank Adam Schiff, Mark Warner, and Tom Perez if that happens.