As we all watched Elizabeth Warren’s presidential hopes spiral into the ground this week, I realized the Democrats need that one friend or family member that can tap them on the back of the head and tell them, “Snap out of it!”

Senator Warren let Donald Trump burrow so deep into her head, she lost all neural pathways dedicated to common sense. He eats at her very soul, day and night. How else can we explain why she would release DNA results confirming she was 99.9 percent white and has less Native American DNA than the average American? [Most whites are, on average, 0.18 percent Native American, according to a study by the National Institutes of Health.]

Of course, CNN, MSNBC, The Washington Post, The New York Times, and the Daily Beast immediately declared Warren the victor in her dispute with Trump over her “Native American” heritage.

That narrative lasted about 10 minutes.

Facts be damned, The Nation’s Joan Walsh couldn’t hold back her righteous joy over Warren’s DNA test: “Warren is showing Democrats — and the media — that she knows how to fight. She won’t let Trump define her as either a faux Native American, an Ivy League elitist, or a liar.” You are right, Joan. Elizabeth Warren can do that all on her own.

During her academic career, it is indisputable that Warren (actively or passively) allowed others to categorize her as a ‘woman of color.’ Her vulgar use of identity politics rightfully marks the end of her viability as a national political figure.

It is premature, however, to think Warren’s public blunder marks the end of identify politics. The Democrats have hard-coded that strategy into their political DNA and, at this point, it would take an extraterrestrial intervention to reprogram them.

But there is something Democrats can learn from Warren: Let go of the Trump obsession. It is now starting to hurt the party. Do they need Max von Sydow standing over them saying, “The power of common sense compels you!”

The obsession may have served a purpose early in the Trump administration in that it reminded Democrats they weren’t suffering through this presidency alone. Semi-contained insanity serves a purpose when it feels like all hope is lost — the pussy hats were even fun.

But all hope is not lost anymore. Short of a GOP Hail Mary in the next few weeks, the Democrats will gain about 35 U.S. House seats in the upcoming election (and my prediction model also says the Democrats will take the U.S. Senate — though that is looking iffy).

Now, the Democrats need to project an image to Americans — left, center and right — that they are prepared to lead this country. Get off the streets, put down the Saul Alinsky rebel handbook and try to look like serious people again.

Pounding on the doors of the U.S. Supreme Court (doors, by the way, the Supreme Court justices never use; so who were they were yelling at?) or chasing U.S. Senators and their wives out of restaurants is not a comforting image to most Americans.

What did the Vietnam Anti-War protests give this country? Two Richard Nixon presidential election victories — and one was a landslide.

Believe it or not, voters generally do not like to see politicians and their supporters display excessive amounts of emotion or employ even minor levels of violence. Too much passion actually scares them away.

Instead, Democrats need to look serious again. Even boring.

To Bernie Sanders’ credit, his unwavering commitment to policy ideas (whether practical or not) keeps him out of the mud swamp where Donald Trump loves to conduct official business. It is why he is viewed as honest, not just by Democrats, but by Republicans and independents. He believes what he says and doesn’t parse his language to fit an audience.

Sanders does frequently mention Trump, but almost always in the context of a policy disagreement. He does not demean himself by resorting to name-calling. I only wish other Democrats took his lead more often (some, like Hawaii Rep. Tulsi Gabbard, do — but most don’t).

And, finally, enough with the negative, hyperbolic rhetoric about how bad things are in this country.

“In these tumultuous times…” started my local NPR station host this morning as he announced another membership fund drive.

What?! What is he talking about? What is his metric?

Is Russiagate weighing heavily on your mood? Well, don’t wait for Robert Mueller’s Russiagate investigation to lift your spirits. It is almost two years now — half of an administration’s term. If Trump is a Russian tool and it takes this long to make an indictment? Thanks for nothing, Bob, the damage is already done. Go back to your retirement.

There are plenty of good reasons to oppose Donald Trump and the GOP — and none of them involve mentioning the Russians. The Democrats don’t need to wallow in the gutter with Trump to make their case.

Here are a few ideas:

Why does this country still spend twice as much as Canadians and Europeans on health care and, yet, experience inferior health outcomes? Is it perhaps time for the Democrats to genuinely challenge the iron triangle formed by lobbyists for pharmaceutical companies, insurance companies, and physicians?

Is it possible to control the U.S. border and still treat refugees with the same decency and humanity we treat our own citizens? [Um, this country may have a bigger problem than immigration to work on.]

How about oppose a foreign policy that is now farmed out to Moscow, Jerusalem and Riyadh (oops, I mentioned Russia). In the long-turn, that is guaranteed to end poorly for the U.S.

And why must this country’s military continue to engage in these endless cleanup operations all over the world that, in truth, are limited footprint, low-optempo wars? Where has Congress and the Democratic leadership been during all of this?

And, specifically, where is the Democratic Party’s leadership on ending U.S. support to the Saudis and Emirates as those countries continue to commit war crimes against the Houthi in Yemen? Nancy Pelosi? Silent. Chuck Schumer? Silent. Cory Booker? Silent. Kamala Harris? Silent. Joe Biden, John Kerry, and Hillary Clinton? Probably best they stay silent given their culpability in what may be the world’s worst humanitarian crisis right now.

In a moment a childlike innocence, CNN’s Wolf Blitzer explained why the U.S. continues its support of the Saudis and Emirates: It’s good for business. I will cut Blitzer, the Brick Tamland of cable TV news, some slack. But when Secretary of State Mike Pompeo says the same thing, it warrants more than one or two Democrats taking a stand against this cynical misuse of American military power. [Thank God for Bernie Sanders, Tulsi Gabbard and the GOP’s Rand Paul for making their opposition visible.]

So there are just a few ideas the Democrats might want to talk about Democrats between now and the 2020 election.

What voters don’t need is a continuation of the Democratic Party’s two-year-long pity party over the 2016 election.

It might work long enough to help the Democrats win back the House, but its a losing strategy for the 2020 election. 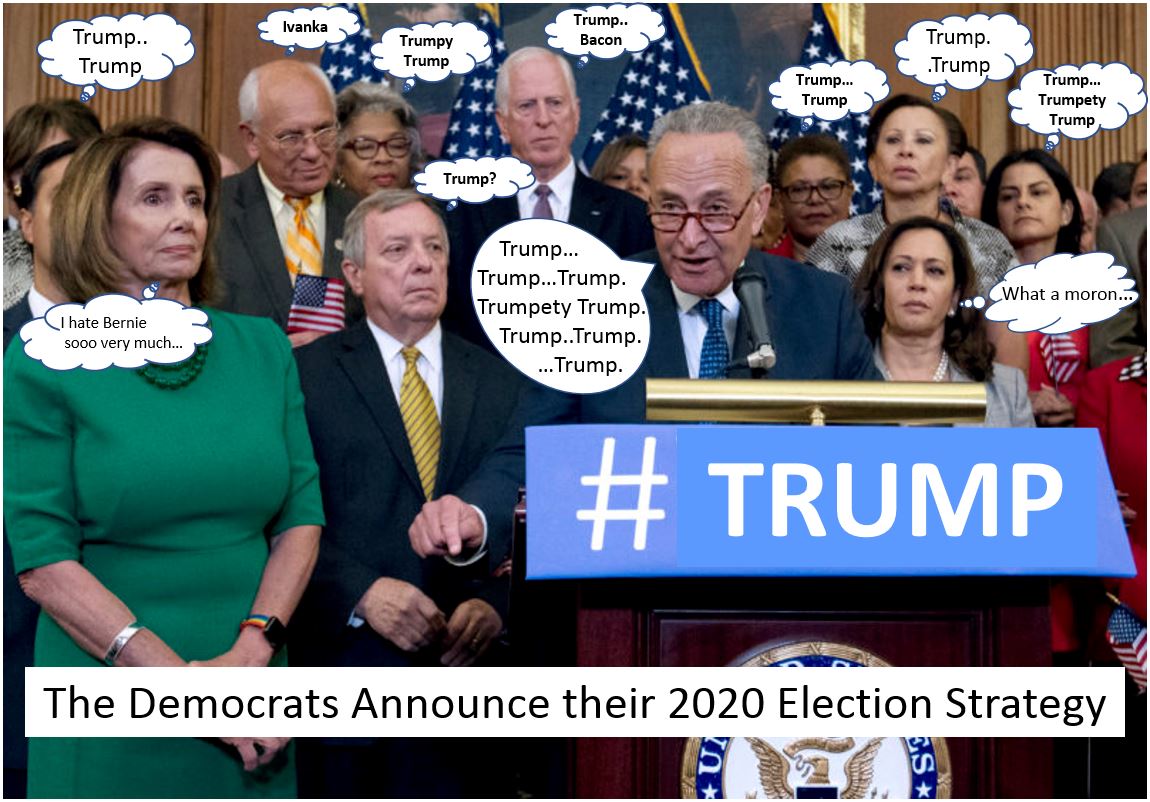