Anyone that spends considerable time with data knows that occasionally it bites you in the ass.

The twelve of you that regularly read my blog know that I am a skeptic when it comes to the “Comey’s Letter Cost Hillary the Election” argument. Nate Silver has provided the most systematic evidence to support this conclusion, but it doesn’t take a data scientist to see where people would come to this conclusion.  This chart, from fivethirtyeight.com, shows Silver’s tracking model over time:

The dotted line indicates the timing of Comey’s letter. I won’t belabor my argument that Clinton’s decline began well before the Comey letter and requires explanation from other factors, such as the Obamacare premium hike news on October 24th or the Podesta emails on Wikileaks. I must admit the chart does show a steepening decline in Clinton’s polling immediately after Oct. 28th (the Comey letter).

Nonetheless, I’ve argued that we need to look at individual-level data to understand the potential impact of any issue or campaign on the final outcome. Ideally, I’d have access to the L.A. Times/USC Panel survey data to make more definitive inferences about the 2016 campaign. I do not.

However, we do have the 2016 American National Election Study data released this past March by the University of Michigan and Stanford University. And we are seeing some clear evidence from the 2016 campaign that….I must admit….supports indirectly the ‘Comey Letter’ argument.

Table 1 below shows how voters’ relative evaluations of Clinton and Trump’s honesty was a strong predictor of their vote choice.

As you can see, how a voter viewed the relative honesty of the two candidates was a decent predictor of how they actually voted.

To gain an even clearer understanding of the vote choice dynamic in 2016, we included in our vote model more variables from the ANES 2016 dataset, including party ID, gender, education, age, ethnicity, and a wide range of issue positions. The statistical output for the single logistic model is here: 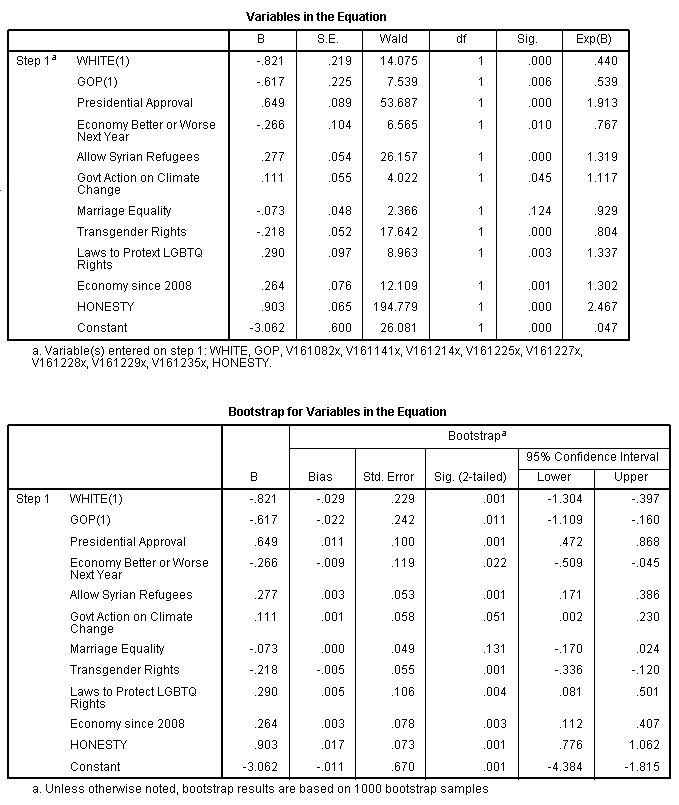 Based on our initial logistical regression model, we find that ‘honesty’ was one of the dominant factors in distinguishing Trump voters from Clinton voters. Using each variable’s Wald statistic as a comparison, voters’ views of the candidates’ honesty was more important than party identification, Obama’s presidential approval, and voters’ evaluation of the economy in predicting vote choice.

You will notice variables like gender, age and education are not in the model, as they were excluded due to lack of statistical significance. This does not mean those variables are not important, as they most likely have strong indirect effects on vote choice through their impact on voter identification, presidential approval, and other variables in the above logistic model.

As we develop other more sophisticated models of the 2016 election (e.g., structural equation models), we will post those results here. But we are confident based on what we’ve seen so far that the importance of ‘honesty’ is not going wash away with other types of analytic techniques.

The 2016 presidential election was the ‘honesty’ election and it is very likely, in that context, the Comey letter would have had a particularly profound impact on late deciders and on voters that did not have a strong preference for either candidate.

I must agree with Mr. Silver that the Comey letter may well have determined the final outcome.

The author can be reached at: kentkroeger3@gmail.com

About the author:  Kent Kroeger is a writer and statistical consultant with over 30 -years experience measuring and analyzing public opinion for public and private sector clients. He holds a B.S. degree in Journalism/Political Science from The University of Iowa, and an M.A. in Quantitative Methods from Columbia University (New York, NY).  He lives in Ewing, New Jersey with his wife and son.