After reading my colleague’s column, “Reality Sucks for the Next DNC Chair,” I am compelled to reply:

In his January 17th article, he made a couple of points with which I strongly disagree. First, he claims the Democrats have become increasingly a ‘presidential party’ at the expense of down-ballot offices. This point has been made by many other pundits, most recently in Politico by Edward-Isaac Dovere. While the claim is defensible, the campaign finance evidence is mixed, if not contradictory.

Have the Democrats’ increasingly funneled money to the party’s presidential campaign when some of that money should have gone to Democrats in down-ballot races? The problem is with the data.  Its difficult to prove this claim one way or the other, in part, because there is no central resource for knowing exactly how much money is spent by politicians in state and local races.  Campaign finance compliance and reporting rules vary by state and aggregating all of this money into a total number is problematic.

The chart below summarizes the campaign expenditures of Democratic presidential candidates relative to other federal races since 1976.  It may surprise some that Jimmy Carter’s 1976 campaign accounted for a higher proportion of total Democratic campaign spending than any campaign since.  Only the two Obama campaigns come close (56 and 54 percent, respectively).  Hillary Clinton’s 2016 campaign accounted for only 42 percent of all Democratic federal campaign expenditures — which is about average. 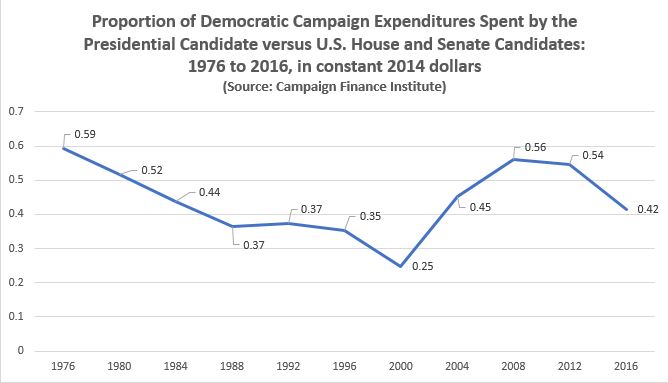 If you want to argue that the Democrats are losing U.S. congressional and state legislative elections because of an over-emphasis on presidential campaigns, it will require a more sophisticated understanding of how campaign dollars impact elections at all levels and how this spending interacts. For example, do local and state candidate gain more or less synergy from higher presidential-level spending than they do from spending by U.S. House and Senate campaign?  Or perhaps there is no relationship?

Its also important to note that the loss of local, state, and U.S. congressional seats also occurred for Democrats in midterm elections which are not affected by a presidential race. So, blaming the fundraising prowess of Democrats’ presidential candidates for the party’s declining success in other races seems unwarranted.

The second point from the Kroeger article that eats my grain is the contention that the Democrats are so far behind the Republicans at all levels of government that it will take a decade to recover.

When you recite the current numbers it does sound bad:  the Democrats are down 47 seats in the U.S. House, down three in the U.S. Senate, have just 16 Governors and control only 18 state legislatures.  But I will contend that the party’s troubles are exaggerated at all levels of government, but particularly at the national level.

I agree that the Clinton popular vote is a biased measure of the Democrats’ national strength, but it is equally foolish to think the Democrats aren’t close to having a winning presidential coalition.  They are close.  Very close.  And only minor shifts in turnout and support levels in a few key demographic segments (most notably working-class voters) would have changed the 2016 results in Clinton’s favor.

The task for the Democrats is greater at the congressional level, but far from irreversible. Regaining the Senate will have to wait until after the 2018 midterms where the Democrats are protecting 10 incumbent Senators in states Trump won.  They will be lucky to hold serve in 2018.  It’s 2020 where the Democrats will need to focus on getting back the Senate.

As for the U.S. House, it will take 24 seat flips for the Democrats to regain power. If we look to history as our guide, that is not a big number to turn in just one election cycle. Since Eisenhower, four out of nine midterm elections under a Republican president saw the Republicans lose at least 24 seats to the Democrats.

I do not dispute that the Democrats are in the political wilderness right now. Their most prominent leaders are old, they rely too much on a patchwork of unconnected issue positions, and don’t provide a coherent organizing principle voters can use as a heuristic device to navigate the political environment.

Yes, the Democrats are in the forest, but its Virginia’s Shenandoah Forest not Alaska’s Tongass Forest. They are close to regaining power at the national level and are far from facing an existential crisis at the local and state levels. Add to this optimistic view that the long-term demographic changes in the U.S. will most likely work in the favor of Democrats and it is hard to feel to bad for them.  The greater challenge may be convincing the Republicans that can’t continue their success without winning the support of more women, minority, and younger voters. In my view, those are the battle lines that will define future elections and the Democrats are more than capable of winning on those fronts.

Democrats, here’s my short-term advice:  Don’t watch TV tomorrow or this weekend.  Go to the movies and see Rogue One for the second time, or just go to dinner and relax.