In the Democratic race, NuQum.com forecasts that Hillary Clinton will win 52 percent of the Democratic caucus votes, followed by Bernie Sanders with 45 percent and Martin O’Malley at three percent.  The NuQum forecast shows the former Secretary of State with a more comfortable advantage over Bernie Sanders than most of the recent polling in Iowa. 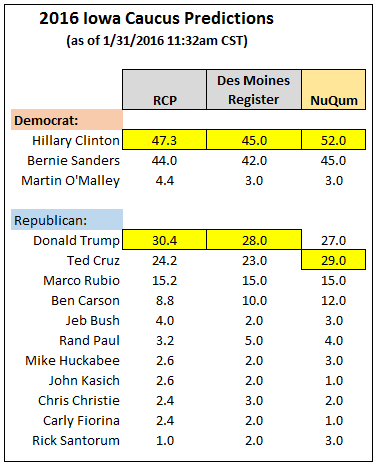 NuQum.com economists utilize Real Clear Politics’ poll averages for its initial forecast and then modify this forecast using marginals from the most recent public poll (in this case, the Des Moines Register Iowa Poll) to adjust caucus vote percentages for each candidate.  The adjustment employed for the Iowa caucus involves identifying the urban/rural composition for each candidate and weighting results accordingly.  Based on a historical analysis, NuQum.com corrects for known biases in Iowa caucus polling data that typically under-represent rural votes in the final vote percentages.  For example, in the 2012 Iowa caucus, most polling data significantly under-represented the final Santorum vote totals.  In the 2016 caucus forecast, Ted Cruz benefits most significantly from this bias adjustment.  It is a safe assumption that this bias adjustment accounts for the ability of the Iowa evangelical community to organize and get out the vote for their preferred candidate(s).  For this election, those candidates most benefiting from evangelical support are Ted Cruz and Ben Carson.

If you have any questions about our election forecast, please give us a call at (515) 512 2776 or email our senior economist at:  kroeger98@yahoo.com