{Feel free to send any comments about this essay to: kkroeger@nuqum.com or kentkroeger3@gmail.com}

Steve Bannon is a very smart man — always three moves ahead of his opponents.

When Bannon told Sean Hannity on Fox News’ “Hannity” recently that he is looking to challenge every sitting GOP lawmaker except Sen. Ted Cruz (Texas), he was laying the groundwork for President Trump’s defense should the Republicans lose the U.S. House in the 2018 midterms.

Bannon’s clever but risky move is an implicit concession that the Republicans are going to lose big in the 2018 midterm elections, but he does not want Republicans to blame the losses on President Trump’s weakness, but rather, on Trump’s strength within the Republican Party.

It would be unprecedented in U.S. electoral history for allies of an incumbent president to sabotage the president’s own party during midterm elections.

Yet, that is exactly what Bannon says he will do. By undercutting Republican incumbents now, Bannon is attempting to minimize Trump’s culpability should the GOP lose the U.S. House.

It’s a counter-intuitive strategy, but if anyone can pull it off, it is Bannon.

Unfortunately, this malignant intra-party skirmish is merely an attempt to divert the public’s attention from the real story of the Trump administration’s first year in office. There have been no major legislative accomplishments.

Will the media and the public fall for this diversionary tactic? Probably. But will Bannon’s intra-party purge attempt actually replace disloyal Republican incumbents with Trump loyalists?

According to Michael Malbin of the Campaign Finance Institute, as of July 2017, 212 U.S. House and Senate incumbents have a primary challenger who has filed a financial report with the Federal Election Commission.

In the 2014 midterms, there were only 95 incumbents with a challenger at this point in the election cycle. The chart below from OpenSecrets.org compare the number of challengers for the last three midterm elections (as of July in the year prior to the election). 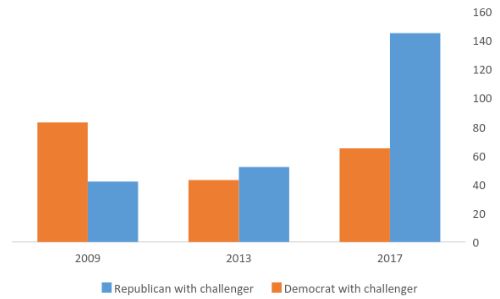 “Defeats of incumbents are rare, and it is very rare for a successful challenger to go on to win the general election,” according to Dr. Robert Boatright of Clark University. “In years with no redistricting, no more than three or four Congressional incumbents are likely to lose their primaries.”

What will happen in the 2018 midterms?

If Republicans do lose the U.S. House in 2018, it will be because of Donald Trump’s low job approval ratings. The contention that Trump can distance himself from his own party’s electoral fortunes has no analog in U.S. presidential history.

However, there is still reason for cautious optimism among Republicans. The Crosstab blogsite, maintained by G. Elliott Morris, continues to predict the Republicans have a 68 percent chance of maintaining control of the U.S. House, despite the Democrats likely winning 54 percent of votes for the U.S. House in their prediction models.

The futures-based prediction market, PredictIt, also continues to give the Republicans a 55 percent chance of keeping control of the House. 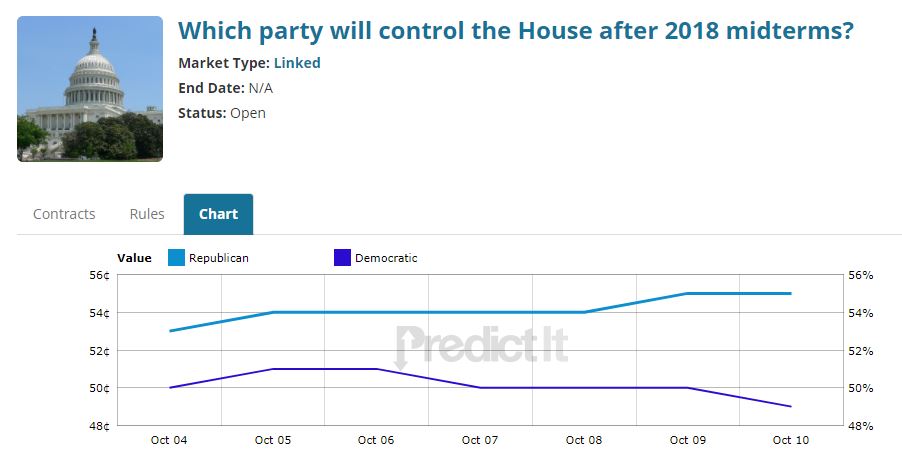 But these predictions are all noise to Bannon’s ears. A lot can change in 13 months. More importantly, Bannon has an enemies list and none of these predictions can account for what Bannon’s offensive against GOP incumbents will mean to the Republican’s chances in 2018.

We are in uncharted waters.