It was on this day in 1968 that Peter Arnett, reporting for the Associated Press on the Vietnam War, sent out his now famous dispatch concerning an American counter-insurgency operation in the provincial capital of Bến Tre:

“‘It became necessary to destroy the town to save it,’ a United States major said today. He was talking about the decision by allied commanders to bomb and shell the town regardless of civilian casualties, to rout the Vietcong.”

While the source and accuracy of the quote has since been disputed, the near complete destruction of Bến Tre during the operation cannot.

Is the American political establishment doing the same thing to, in their view, save our democracy from Donald Trump?

That possibility is palpable when you read the latest rumor being pumped by the online #TheResistance concerning the Trump-Russia probe.

I confess, I was intrigued when I read Krassenstein’s opening tease. Plus, it gives me another reason to keep Carter Page in my life, for a little longer at least.

Wow! Even being forced to pretend I know how to pronounce Buryakov, Vnesheconombank, Podobnyy, and Sporyshev, I could not stop reading Krassenstein’s theory on Page. It sounds like Page is…well, just read on:

After reading this I wouldn’t blame you if your inner Jed Clampett belt out a loud “Well doggie!” There you have it. Carter Page is on our side. He’s not a Russian stooge. He’s an FBI stooge. But, wait, there is more… 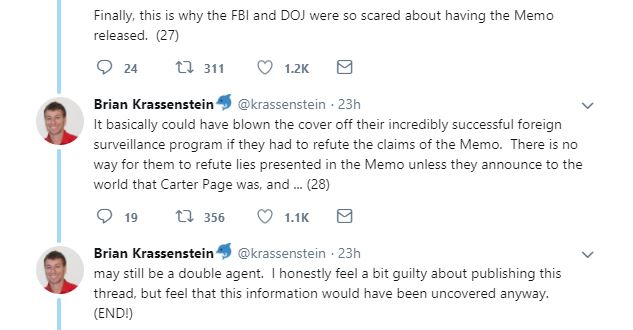 Yes, Brian, you should feel a bit guilty. You just wasted five minutes of my Twitter feed reading time on the goddamn stupidest theory ever shared on Twitter. And, believe me, the competition is fierce for that distinction.

In fairness, the Krassenstein theory on Carter Page isn’t total bullcrap. Like any good theory, the ‘Carter-Page-as-FBI-informant-against-Trump’ is built on some actual facts.

The FBI’s interest in Carter Page as far back as 2012 was reported by The New York Times in April 2017. The article also reported that Page helped the FBI in getting Evgeny Buryakov plead guilty to covertly working as a Russian agent in the United States.

So, yes, Carter Page is probably not a simple buffoon (in the vein of a drunken, Aussie-diplomat-speaking-to George Papadopoulos). His central role is indisputable in the Devin Nunes memo. And will be as well in the ‘Intel-Committee-Democrats-Deserve-A-Memo-Too’ memo.

But even Krassenstein acknowledges a flaw in his theory: 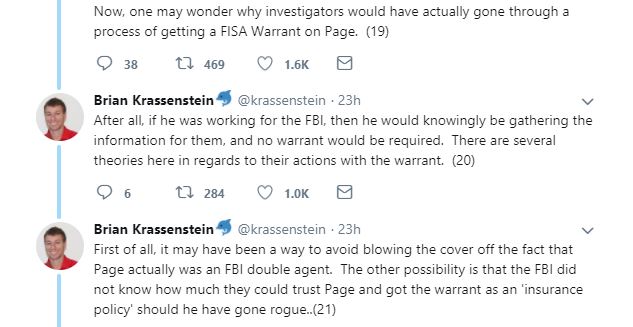 Yes, Brian, I do wonder why the FBI would waste a FISA court’s time as part of a counter-intelligence deception effort.

You can scratch off the first explanation.

If the FBI is using the FISA court process as a decoy for ‘an incredibly successful’ foreign surveillance program on fear the Russians might be privy to those hearings, then this country is in big, BIG trouble.

Was the judge a possible Russian agent? Or maybe one of the agents representing the FBI in the FISA court? Perhaps the stenographer? Perhaps the Russians had a listening device in the judge’s gavel?

Besides, there are far easier ways to get deceptive information into Russian intelligence’s blood stream than waste a FISA court’s time.

The second explanation as to why the FBI might make four applications to the FISA court to surveil Page is equally problematic. If the FBI didn’t trust Page while he was acting as an FBI informant on the Trump/Kushner organizations, they already had the authority to surveil him. They didn’t need a FISA warrant. If Page stopped being an FBI informant and subsequently joined the Trump campaign (in March 2016), then the FBI would need FISA court authorization, but how is that really different from what we already know?

And while Krassenstein’s Page-as-FBI-Informant-Against-Trump theory has other holes, it is not inconceivable that Carter Page was (and is) on the FBI side of the ledger in the Trump-Russia collusion probe.

However, the biggest problem with Krassenstein’s theory is not its plausibility, its the possibility that its true!

[As an aside, if the FBI and U.S. intelligence community had enough concern that Trump was compromised by the Russians to plant an informant in his campaign and, while doing so, watched as the Russians hacked DNC and Hillary Clinton campaign emails, blinded social media users with millions of impressions of fake news, all that as Trump tallied up 306 electoral votes and now sits behind the Resolute desk — Jesus Christ! How incompetent is our intelligence community if that happened! We would have been better off letting Moe, Larry and Curly run our intelligence services.]

If the FBI hired an informant to surveil the Trump campaign (and Jared Kushner’s real estate deals), this country will have a full-blown constitutional crisis on its hands.

Unbeknownst to most Americans, the Constitution’s Fourth Amendment does not put many restrictions on the government planting informants into our communities. If the government plants listening devices or taps our phones, they need reasonable cause and court-issued search warrants. If they want to hire your Uncle Joe to spy on you, not much is in their way to stop them.

“Americans may be surprised to learn that the Supreme Court has interpreted the Constitution to impose few, if any, restraints on the government’s authority to plant or send covert informants and spies into our lives,” wrote legal scholar Tracey Maclin for the Washington University Law Review. “The Court reads the Fourth Amendment’s guarantee against unreasonable governmental searches and seizures to place no limitations on the government’s power to send informants to infiltrate our homes, businesses, religious organizations, or social groups.”

If you didn’t know that already, let it sink in. You might want to pat down Aunt Mimmie at the next Thanksgiving dinner.

That is what Krassenstein is talking about when he suggests Carter Page was an FBI informant being used to gather incriminating information on Donald Trump and associates.

If that actually happened (and it most likely didn’t). Game over. People will go to jail, but probably not anybody connected to the Trump campaign. That use of federal offices for a partisan intrusion into a presidential election will put members of FBI and Department of Justice senior management in jail. Indictments and convictions would go straight into the White House.

[To the Krassenstein theory’s credit, it would answer this question:  Why would the Dept. of Justice and FBI show so little interest in indicting Hillary Clinton on her misuse of classified information and destruction of subpoenaed emails? If Clinton had gone down on felony charges too, Bernie Sanders would be president right now…or Jill Stein?!]

Do not fear, Democrats. It is highly unlikely Obama’s Department of Justice thought it was OK to hire an informant to collect incriminating information on the Trump campaign (and ancillary associates). But that some Democrats are getting giddy over the idea is almost as disturbing.

Is Trump-hatred-syndrome frying Democrats’ brains? Have they no concern for the laws and norms governing our government’s intrusions into our lives? Are they so blinded by Trump-hate that they will consent to an administration discrediting the presidential candidacy of an opposition candidate through the use of federal informants?

That is what dictatorships do.

Krassenstein’s theory proposes that the Obama administration was so concerned that Donald Trump was compromised by the Russians that its agents were willing to shred our founding principles to prove it.

Even if Trump is compromised by the Russians (and there is no concrete evidence yet that he is!), using FBI informants to surveil his campaign is the WRONG way to go about gathering evidence.

If true, it would permanently destroy public confidence in our federal law enforcement and intelligence agencies. It would destroy our confidence in government in general.

Such an act would be a case of the cure being worse than the disease. It would be analogous to a destroying a town just to save it.