In his new book, “The Unmaking of the President 2016,” former Bill Clinton lawyer and adviser Lanny J. Davis makes a strong argument that FBI Director James Comey’s October 28, 2016 announcement of a new investigation into Hillary Clinton’s emails was the primary cause of her electoral defeat to Donald Trump.

“The visible tip of the iceberg was James Comey’s Oct. 28, 2016, letter to Congress,” writes Davis in The Hill. “All data proves that, but for that letter 11 days from Election Day, Hillary Clinton wins the presidency.”

Davis is not the first person to blame Comey for Clinton’s defeat, starting with the candidate herself. Fivethirtyeight.com founder Nate Silver was one of the first analysts to use data to make the same argument. So, OK, I’m convinced. It’s Comey’s fault.

But, anyone familiar with W. Edward Deming’s process engineering principles knows that, until you identify a problem’s root cause, you haven’t solved the problem.

For understandable (but unethical) reasons, Clinton wanted to protect her work-related electronic communications from the subpoena powers of Congress and law enforcement. Some people are paranoid and some people really have enemies. Clinton had enemies.

Based on her long experience with aggressive special prosecutors and Republican-controlled congressional committees, Clinton felt justified in protecting her privacy. And I have no doubt she would do it all over again if she had the chance. And she would lose the election again.

It didn’t help Clinton that, for a month before the Comey Letter, Deputy FBI Director Andrew McCabe sat on the knowledge that Clinton emails resided on Weiner’s laptop. Why not blame him too?

I resist wasting more energy on answering ‘what really happened?’ in the 2016 election. There is no ground left to gain. Everyone is deep in defensive trenches and little will compel them to leave.

Yet, the Davis book reminds me of my own puzzlement over the Comey Letter. It never made sense why Comey would defy bureau precedent by issuing that letter to Congress, only to turn around a few days later and declare the second Clinton email investigation was completed and no indictments were necessary.

Blaming “deep state” FBI agents out to get Clinton is laughable. After all, nobody, not even Davis, has accused these agents of planting her emails on Weiner’s laptop. They simply were doing their job and passed the information along to their superiors.

So, short of proving that FBI agents in the New York City office were involved in a conspiracy against Clinton, there is nothing gained by blaming them or anybody else for Clinton’s political defeat.

Instead, I believe a more interesting and profound story may exist underlying the Comey Letter drama. If only we had a free and independent press in America to find out.

One of the most troubling aspects of the past two decades of American journalism has been the news media’s over-reliance on anonymous sourcing and limited access to the underlying evidence that would corroborate those sources. 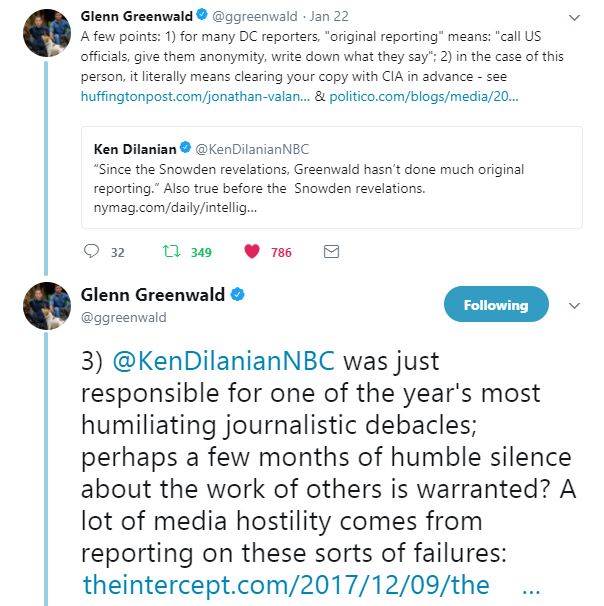 Greenwald and Dilanian’s pissing match aside, American journalists largely rely on government bureaucrats, public relations offices and political partisans to provide and interpret the news for them. And sometimes they cut out the middle man and just talk among themselves to generate news stories.

That, of course, is a bad thing.

And that is why I have never accepted the news media’s final conclusions on the Comey Letter — which was the proximate cause of Clinton’s election loss and therefore deserves a complete and thorough investigation by the Fourth Estate.

The story has never made sense.

Why did former FBI Director James Comey issue his letter to Congress in late October re-opening the Hillary Clinton email investigation? And then just a few days later, declare it completed?

Rogue FBI agents loyal to Rudolph Giuliani is not an adequate explanation.

So, what really happened?

As she loves to remind anyone willing to listen, Hillary Clinton blames the Comey letter, which announced the re-launch of the FBI’s investigation into her use of a private server for work-related email communications, as the definitive factor in her defeat.

Proponents of Clinton’s theory (such as Silver and Davis) ignore that her poll numbers had been dropping in the days prior to the Comey Letter, likely due to news that, for many Americans, their health insurance premiums were increasing dramatically under Obamacare.

Nate Silver’s own graph on the issue lends support to the Obamacare thesis. Clinton was shedding support as early as October 18th. She was halfway through a sustained three-week decline in support when the Comey Letter was released: 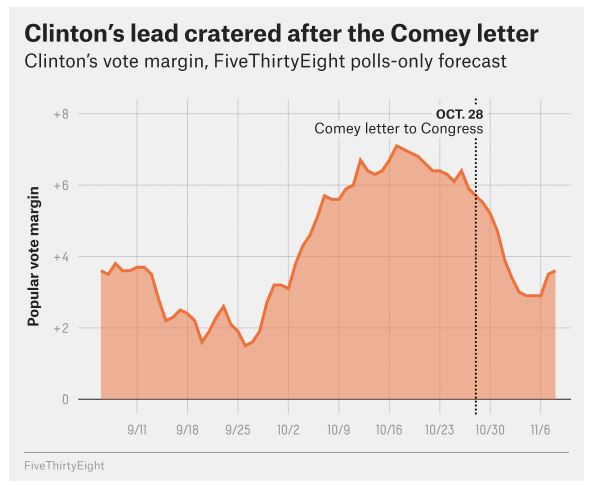 Remember, this is the same issue that helped cause Democrats to lose 63 House seats in 2010. Apparently, it is an issue voters care about. But that is not the post-election narrative anyone wants to hear.

Their conclusion would be defensible if not for the unusually delicate treatment Clinton and her State Department aides received from FBI investigators during the first email investigation.

Numerous and generous immunity agreements, allowing Clinton to bring counsel to her FBI interview, and then not recording the Clinton interview, all point to the conclusion that the FBI was too passive in building a case for indicting Clinton and her associates.

All that hard work by rank-and-file FBI investigators and all they get to show for it is a James Comey press conference.

And then I think about the Comey letter being issued just 11 days before Election Day. Pundits in the mainstream media suggest its existence proves that the first Clinton email investigation was not a sham. What point is a sham investigation if you turnaround and club Clinton with a new investigation 11 days before the election?

What would be the point?

In testimony before the Senate Judiciary Committee in May 2017, Comey responded to a question as posed by Senator Dianne Feinstein (D-CA) regarding his rationale for issuing the letter to Congress:

“I met with (my investigative team) that morning (October 27), in my conference room and they laid out for me what they could see from the metadata on this fella (former congressman) Anthony Weiner’s laptop that had been seized in an unrelated case,” testified Comey. “I sat there that morning and I could not see a door labeled ‘no action’ here. I could see two doors and they were both actions. One was labeled ‘speak’ and the other was labeled ‘conceal.'”

In short, Comey believed the integrity of not just the FBI, but of the presidential election itself, could be challenged if, after the fact, it was revealed that the FBI concealed its second Clinton email investigation.

The logic is sound, but it neglects one important factor. Clinton was viewed as all but certain to win the election. Comey’s rationale must have incorporated that piece of knowledge — even if he doesn’t admit it. Otherwise, given the Comey letter‘s awkward timing, why take the risk to his or the FBI’s reputation?

The Comey letter rationale, as told by Comey himself and repeated by Trump’s critics ever since, is also unconvincing for another reason. No doubt he cared about the election’s integrity, but the choice was never ‘speak’ or ‘conceal.’ This is the federal government we are talking about here. I.F. Stone famously said “All governments lie.”

The more accurate statement is, “government’s don’t volunteer the truth, unless forced to.” It is why we have a FOIA law.

And that was one of Comey’s options, faced with the decision to notify Congress about the new Clinton investigation. He could have, without controversy, kept the information about the new email investigation away from the public for a long, long time.

Sure, those rogue FBI agents in New York could have leaked details about Weiner’s laptop to the press, but Comey has never been shy to respond to those kinds of leaks with the perfunctory reply, “I can neither confirm nor deny.”

He just needed to stonewall for 11 days. That’s all.

But, instead, Comey offered a false choice when responding to Senator Feinstein’s question. And why did he do that? Well, that’s the question.

Something made him fearful of not issuing the letter.

Who was on the investigative team that met with Comey on that October 27th morning? Was Peter Strzok part of that team? Or did just the duty of writing the letter fall into his lap?

What pressure could the FBI’s New York Office put on Comey to issue the letter? Threaten leaks? Comey wouldn’t have lasted as long as he did as FBI Director had he not been able to handle information leaks.

The recent revelation that the initial draft of the Comey letter was written by Strzok, who was found to have shared anti-Trump sentiments with another FBI agent while he was working on the Clinton email investigation, confirmed to some in the media that Strzok’s was an objectivity player in this drama.

However, the one-page Comey letter itself (which you can access 102816_FBI-Letter) was so terse and void of substance that it is unclear how it exonerates Strzok’s expressed political bias against Trump. The Comey letter simply states that additional evidence in the Clinton email investigation had been uncovered and required his office’s due diligence.

A more troubling theory is that Comey was under pressure from his team’s rank-and-file investigators who felt the original FBI investigation into Clinton’s emails was not conducted in good faith?

We have evidence of that dynamic from a May 10, 2016 Washington Post story that received very little coverage from the mainstream press at the time:

It is improbable that an FBI agent would make that “mistake” on accident. It had to be a conscious decision by the agent to lodge, in effect, a small protest against the whole process. Think about it: The area where Clinton aide Cheryl Mills was most vulnerable legally — the decision rule and process by which Clinton’s personal emails were identified and deleted — is where she had cut a deal with the Department of Justice.

Did the FBI’s New York City office assist (as opposed to lead) this symbolic mutiny of FBI investigators working on the Clinton email investigation?

Pure conjecture at this point. But we don’t know. There is been nary a murmur from Washington journalists on exactly how the Comey letter went down. We are forced to accept Comey’s congressional testimony on its face value and not question its implications, as determined by partisan interests.

If senior FBI management pre-ordained the Clinton investigation’s outcome, was the Comey letter a way for rank-and-file FBI investigators to give Clinton the middle finger and were Comey and Strzok just unwilling participants in this minor rebellion?

She was going to win anyway.

As members of Comey’s investigative team start retiring from the bureau, hopefully journalists will start putting the real story together on what happened during the Comey letter fiasco of October 2016.