In the latest Gallup Poll, President Donald Trump has reached a 40 percent job approval rating for the first time since late September.

While not great — no elected president has been this low this early in his presidency — it does represent a significant improvement for Trump from the low 30s he saw in early December 2016.

Are we at a pivot point in Trump’s presidency where more and more independents and weak partisans are starting to give Donald Trump and the GOP another chance? Is the passing of the Trump tax bill, the growing strength of the U.S. economy, and the territorial defeat of ISIS giving some Americans a reason to reconsider their view of this president and his party?

In just a few months, some Americans will see perceptible increases in their after-tax disposable income as a result of the new law — especially in red states where the Republicans need to rebuild and reinforce their support going into the 2018 midterms.

Still, the Democrats and #TheResistance are not going to yield an inch to Trump and the GOP for an imbalanced tax cut that gives 50 percent of the benefits to the top 1 percent of Americans. And, on the objective merits, they shouldn’t.

But for a large swath of the American electorate, when it comes to taxes, they simply are not the ideologues the Democrats want them to be. They are too busy working hard and paying bills and they just don’t begrudge wealthy people getting wealthier.

If the Democrats are convincing themselves that the GOP will pay dearly at the ballot box for passing the Trump tax bill, they may be disappointed on the morning of November 7th.

When New York Senator Chuck Schumer says, “Republicans have directed a lion’s share of the benefits to the already wealthy, the already powerful corporate America and the rich,” he may be factually correct, but he fails to appreciate an almost vicious streak of schadenfreude that colors the views of many Americans.

That’s a bit harsh, I suppose. But when you compare American attitudes to Europeans’ about personal responsibility, empowerment, and economic outcomes, Americans are much less likely to believe their life’s outcome is determined by uncontrollable social forces (Source: Pew Research, 2011).

As to their society’s priorities, Americans are also much more likely than Europeans to prioritize “freedom to pursue life’s goals” over eliminating poverty (Source: Pew Research, 2011). 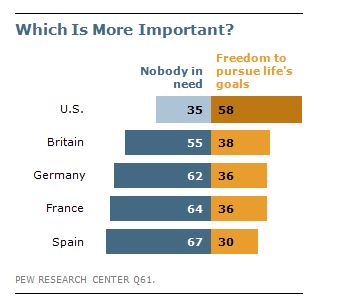 Collectivism and empathy simply do not define American culture. If they did, would we be ignoring this country’s opioid epidemic, or shrugging off the millions of Americans that will once again (though often by their own choice) not have health insurance, or turning our backs to the consequences of the Syrian civil war we helped instigate?

We can be generous in our charity. According to Gallup, 85 percent of Americans give money to charities each year.

But charitable giving is not the same as empathy and it should not surprise us when tens of millions of Americans walk into the voting booth next November and vote for the party led by a man who is an alleged sexual assaulter, shows more compassion towards racists marching in Charlottesville, Virginia than Puerto Rican Americans still reeling from the aftermath of a Category 4/5 hurricane, has no fear of nuclear brinkmanship, shows little capacity to empathize with others, and has only a casual relationship with the truth or the basic knowledge necessary to be president.

The America people have a staggering capacity not to give a sh*t about most things.

This cynical assessment of the American people, while not entirely fair, moderates my expectations for the Democrats in the midterm elections.

Yes, standing just eleven months out from the midterm elections, it is hard to fathom the Democrats not crushing the GOP in November. The media’s coverage of #TheResistance and #MeToo movements in 2017 is far more positive than its coverage of the Tea Party in 2010.

Yet, I can feel it in my bone marrow. The Democrats are going to blow it — and on an Hindenburg/Titanic scale.

But what are the data telling us?

But that is the same futures market that predicted a Hillary Clinton landslide electoral college victory a day before Election Day last year.

This is partly why we prefer econometric models for election predictions.

In an earlier column, NuQum.com analysts offered a simple predictive model for U.S. House midterm elections. The model variables are as follows:

The statistical model’s specification is as follows:

NuQum.com’s current prediction, where Trump approval is at 40 percent and real disposable income growth at around 3.6 percent (which is historically high), is that the GOP will lose 25 seats in the midterm elections — right at the cutoff point where the Democrats regain control of the House.

The NuQum.com model puts a heavy emphasis on the economy and our current assumption of an unusually strong economy in 2018 is critical to its midterm prediction.

The bottom line is, if the economy continues to grow at a steady pace where people feel it and Trump can find a way to get his approval numbers over 41 percent, the GOP has an even chance of keeping control of the U.S. House.

After almost two years of breathless coverage of the Trump-Russian collusion investigation, and an almost daily offering of ill-considered Trump tweets or other manifestations of Trump’s cruel brand of narcissism, the Democrats may still find themselves in the minority in the U.S. House after the midterms.

If that happens…there will be hell to pay in the Democratic Party.

Well, rather, there should be hell to pay…