Sinclair Broadcast Group, the owner of 173 television stations in the U.S., recently required its stations’ news anchors to read a script promoting the objectivity of their news coverage and warning viewers about the partisan bias plaguing other news outlets.

In the broadcast business, this is known as a ‘must-run,’ and Sinclair is well-known for using ‘must-runs’ for conservative commentaries.

In response to Sinclair’s promotion, the anti-Trump media had a collective meltdown.

The irony of Sinclair promoting its stations’ objectivity in news coverage is undeniable. Yet, it must also be acknowledged that Sinclair, as a for-profit business enterprise, has every right to distinguish its service from its competitors, even if it is based more on fiction than reality.

As critical as I’ve been about the anti-Trump news media’s reporting (e.g., MSNBC, CNN, The New York Times, The Washington Post, Politico.com, Vox.com, etc.), I have always supported their right to be biased in their coverage. I also recognize how partisan-driven news attracts audiences which, in turn, generates profits. The Fox News Channel has been proving that for the past 20 years.

That is our nation’s commercial news system. We can lament its existence and the lack of mainstream, non-partisan alternatives, but we cannot deny the partisan (anti-Trump) media’s right to do what they do.

And Donald Trump has been a godsend to many news outlets, as exemplified by the New York Times surpassing $1 billion in revenues and MSNBC attracting its largest audiences ever this past year.

The anti-Trump news outlets have a tangible incentive to be biased.

And Sinclair has every right to call them out for this bias, regardless of the hypocrisy involved.

The subsequent industry-wide freak-out about Sinclair forcing its local news anchors to read a statement about the importance of news objectivity is equally hypocritical. 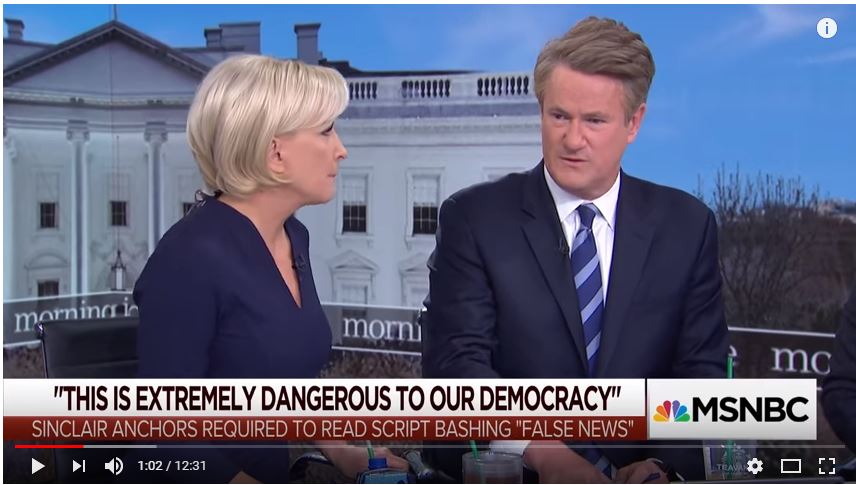 “I don’t understand reading that (Sinclair script),” bemoaned Morning Joe co-host Mika Brzezinski. “This was a disgrace across the board on the part of the journalists involved who were acting out a script rather than understanding the perspective of the news and pushing back when necessary.”

Never to be out-outraged by his co-host, Joe Scarborough chimed in: “It was ripped straight out of the playbook by Donald Trump which is attack mainstream media, talk about ‘fake news’ while Donald Trump spent the whole weekend spewing out ‘fake news.'”

Fair enough. It took some audacity for the Sinclair stations to present themselves as objectivity purists, but was it “extremely dangerous to our democracy”? Really?

Our greatest responsibility is to serve our Northwest communities. We are extremely proud of the quality, balanced journalism that [TV Station Call Letters] News produces.

Hypocrisy aside, there is nothing democracy-threatening in that first line.

But we’re concerned about the troubling trend of irresponsible, one sided news stories plaguing our country. The sharing of biased and false news has become all too common on social media.

This next sentence has merit as well. It is not hard to find examples of CNN or MSNBC anchors recklessly conjecturing on what crimes Donald Trump may have committed, based often on little more than hearsay or a cryptic court filing by special counsel Robert Mueller’s investigation team. That’s not objective journalism. That’s called guessing.

Of course, I would throw Fox News and Sinclair stations in that mix of irresponsible journalism even though that was not Sinclair’s intent.

As for the third sentence, some could interpret it as more of a criticism of the right-wing social media environment than anything else. A broader interpretation is that there is biased and false news stories being bandied about Facebook, Instagram and Twitter from all ideological persuasions. A true statement.

Unfortunately, some members of the media use their platforms to push their own personal bias and agenda to control ‘exactly what people think’…This is extremely dangerous to a democracy.

That is pretty much what you hear on any given night from anchors on MSNBC, CNN and Fox News, though I would argue they are pushing a ‘corporate bias and agenda’ and not their own.

At [INSERT TV STATION CALL LETTERS] it’s our responsibility to pursue and report the truth. We understand Truth is neither politically ‘left nor right.’ Our commitment to factual reporting is the foundation of our credibility, now more than ever.

This first sentence in this paragraph is true. The second sentence, ditto. And I really want to believe that they believe in the third sentence, but skepticism is warranted. Nonetheless, Sinclair anchors saying this on-air is hardly a threat to our democracy. I only hope their audiences hold them to that standard.

But we are human and sometimes our reporting might fall short. If you believe our coverage is unfair please reach out to us by going to (our website) and clicking on CONTENT CONCERNS. We value your comments. We will respond back to you.

We work very hard to seek the truth and strive to be fair, balanced and factual… We consider it our honor, our privilege to responsibly deliver the news every day.

Forgive me if these last sentences don’t elicit fear for the impending end of our constitutional republic either. If anything, it is the hyper-sensitive and disproportionate reaction by the anti-Trump media that seems like the ‘fake news.’ Sinclair engaged in a marketing campaign, ham-handed as it may have been, and in that effort enlisted (or, as they say in the military, voluntold) its news anchors, also known as employees, to read a script. That is as much of a non-news story as you can get.

If you are a journalist at Sinclair station and you don’t like how Sinclair does business, quit. Which is exactly what one Sinclair employee decided to do.

Former Sinclair news director Aaron Weiss quit over the ‘objective news’ promotion and promptly went on CNN to criticize Sinclair for forcing its news anchors to read the corporate-written statements verbatim. His displeasure with the practice is defensible, particularly if any job threats were involved, as he suggested there were.

“I have no problem with conservative-slanted or liberal-slanted news, but own it,” Aaron Weiss told CNN’s Alisyn Camerota. But it begs the question, does that also apply to corporatist Democratic-slanted news as well? I’m talking to you CNN and MSNBC.

The act of owning one’s political bias assumes a level of self-awareness not common within most people. And, frankly, naming one’s own biases is more complicated than simply referencing partisanship. There are other, often more powerful, biases at play in the media. There is confrontation bias (news organizations like to see stories as conflicts). There is narrative bias (the tendency to connect news stories to larger narratives). And there is, of course, today’s anti-Trump bias (a form of the narrative bias) which transcends partisanship and manifests itself anytime Donald Trump says or does anything.

Trump could cure cancer and the anti-Trump media would declare he was a healthy cell supremacist.

All the variations in bias aside, partisan bias has become the summary description of the news media today and some media observers are not surprised or alarmed at its rise to dominance.

Gabriel Sherman, who covers the media for New York Magazine, believes partisan journalism is the historical norm and it is objective journalism, uniquely post-World War II phenomenon, that is unsustainable.

He may be right, but his conclusion exists in the context of a commercial, profit-driven media environment. What he cannot tell us is whether the American public, and by extension our democracy, is better served by a partisan media versus a more objective one.

Partisan media do serve a purpose in a democracy. They not only inform voters of the policy and ideological preferences of the major parties, but strengthen the opinion congruence between the party leaders and voters. It makes parties more ideologically homogeneous.

We see evidence of this in today’s highly partisan electorate (see Figure 1 below from research by Dr. Lee Drutman) and from the increasing distance between the ideological centers of the parties (see Figure 2 below from the Pew Research Center).

Objective news outlets, on the other hand, helps us critique the performance of the parties, particularly when they are in power.

Without the objective news media, the likelihood decreases that citizens will modify their own views as party performance warrants. If a democracy requires anything, it is the responsiveness of elected leaders and policies to the will of the people. It must have the flexibility to change policies as conditions and performance change. The partisan media has made that evaluation more difficult, and that is a very bad thing for a democracy.

In their highly-regarded study of the link between public policy outcomes and public opinion, political scientists Martin Gilens and Benjamin I. Page concluded: “When one holds constant net interest-group alignments and the preferences of affluent Americans, it makes very little difference (to public policy outcomes) what the general public thinks.”

That is not exactly the American democracy I read about in textbooks. And it reinforces the belief that we need to bring objective journalism back into the mainstream of American media.

Sinclair’s local news anchors proved they can parrot the ideals of objective journalism, but do they really mean it? And will any other news media organizations follow?