Through a spokeswoman, Iowa Senator Joni Ernst reacted swiftly to President Trump’s ban on transgender Americans serving in the military:

“(Sen. Ernst) has served with people from all different backgrounds and that gender is not a vital indicator of someone’s military prowess. She believes what is most important is making sure service members can meet the physical training standards, and the willingness to defend our freedoms and way of life. Americans who are qualified and can meet the standards to serve in the military should be afforded that opportunity.”

This is from a Republican senator that was seriously considered for the Vice Presidency by the Trump team. Add to the mix that Joni Ernst is a military veteran and is respected in the U.S. Senate for her deep knowledge of U.S. military personnel issues and her strong rebuke of Trump’s new ban becomes a politically significant moment.

Perhaps the most dramatic reaction to Trump’s latest policy-by-Tweet moment came from Utah Senator Orrin Hatch: “I don’t think we should be discriminating against anyone. Transgender people are people.”

That simple but profound comment comes from an 83-year-old man representing the very conservative state of Utah.

The speed with which Republican legislators denounced Trump’s transgender ban tells you everything you need to know about the political ramifications of this sudden policy change — a policy that caught even the Dept. of Defense’s public affairs office by surprise. There is no constituency for this new ban and Trump will find no comfort from his staunchest supporters in the military. They didn’t ask for this ban and they know how destructive this unexpected shift will have on thousands of U.S. military service people who currently serve and have done nothing to warrant this latest presidential fiat.

The Associated Press estimates there are between 2,500 and 7,000 transgender troops currently serving in the military with another 1,500 to 4,000 in the reserves.

Trump is misreading his own base on this one. As this blog presented recently, the transgender bathroom law controversy strongly divides Americans and this division correlates with partisanship and ideology. That should be no surprise. 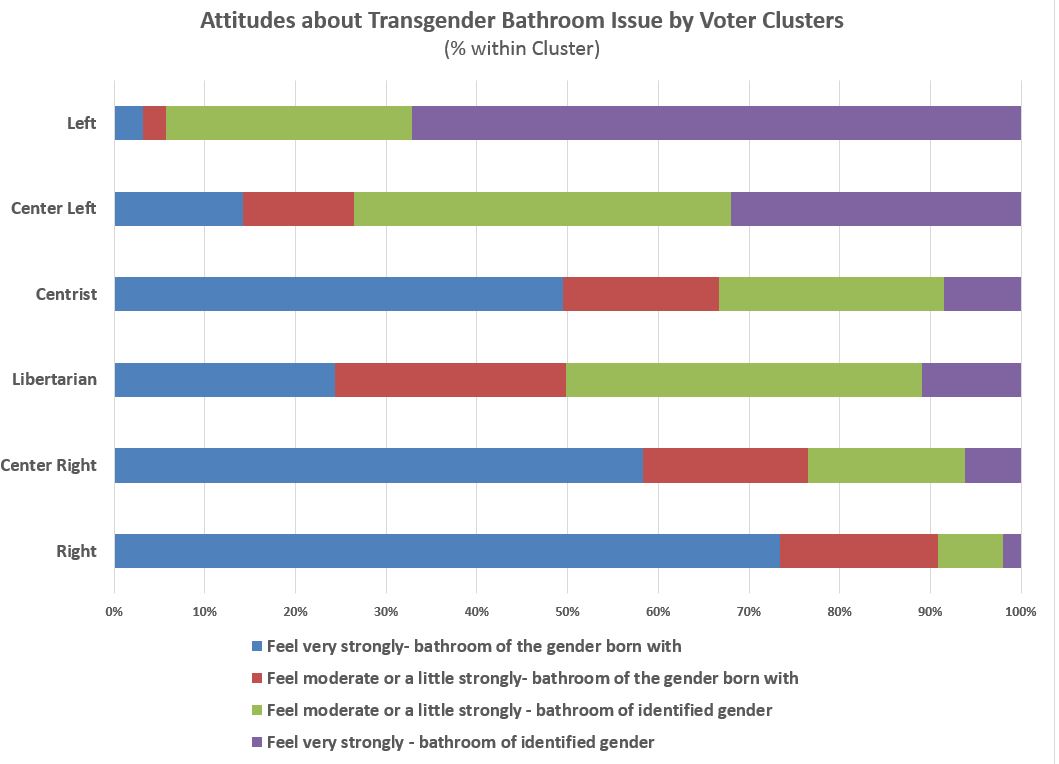 However, if Trump thinks attitudes on bathroom laws are isomorphic to attitudes on banning transgender people from the military, he will be disappointed.

In opinion research, one of the first things survey professionals learn is that ‘issue framing’ can dramatically alter how people respond to survey questions. The transgender bathroom law issue has been framed in the conservative media as not just a potential privacy invasion, but a palpable threat to the security of young children.

“Do you want a male sex offender using the same bathroom as your young daughter?” asked Joseph Backholm from the Family Policy Institute of Washington.

You can challenge the validity of Backholm’s inference (and I most adamantly do), but you can’t deny its potential power to mold the opinions of average Americans regarding transgender bathroom laws.

The politics around transgender individuals serving in the military has long been presented in a different frame — including within the conservative media that historically has opposed (until recently) U.S. military personnel policy protecting the rights of lesbian, gay and bisexual individuals to openly serve. Past opposition to their openly serving was most often framed around the construct of ‘troop morale and cohesion.’

Allowing lesbian,  gay and bisexual individuals to openly serve has been in place for six years now with no evidence of declines in troop morale, cohesion or readiness.

On Sept. 20, 2011, when the DoD policy of “Don’t Tell, Don’t Ask” (DADT) was lifted, the issue had in many ways already been decided by America’s evolving cultural attitudes and norms that were growing ever more accepting of the LGBTQ community in all aspects of American life.

For transgender individuals, however, the politics around their acceptance has taken longer and remains, as evidenced by Trump’s behavior, somewhat unsettled. The ban on transgender persons from serving was not lifted until June 30, 2016 and, like the ending of DADT,  has had no impact on the readiness of our armed forces.

And that is where framing becomes important to current attitudes on transgender Americans serving in the military. Even Fox News’ Tucker Carlson, who supports the new Trump ban due to its potential “costs” to the U.S. government stemming from possible transition surgeries — which is trivial compared to DoD’s $600 billion total budget — frames the issue around one of economics, not the security of our families.

That framing difference — our family’s security versus economics (and/or troop readiness) – will affect how Americans react to Trump’s new ban. My prediction is that a strong majority of Americans (let’s say, over 60 percent) will oppose Trump’s unilateral action against the transgender service members.

As of now, all we have are the swift and unequivocal comments of a significant number of congressional Republicans who are saying to President Trump: Your ban on transgender Americans serving in our military is unacceptable.

The 2016 ANES dataset, data dictionary, and computer codes (SAS JMP) used in this article are available upon email request to: kkroeger@nuqum.com