No matter how many times Democratic strategist Steve Phillips repeats his prediction about the Democratic Party’s ascendancy, it doesn’t make it so.

His latest evidence-based analytic train wreck was published by the New York Times and concludes that the mistake the Democrats (i.e., Robbie Mook, John Podesta, Hillary Clinton, et al.) made in 2016 was that they spent too much time and money worrying about working-class, white males and not enough directed towards getting ‘brown’ (his word) Americans to turnout for Clinton.

“The country is under conservative assault because Democrats mistakenly sought support from conservative white working-class voters susceptible to racially charged appeals,” intones Phillips. “Replicating that strategy would be another catastrophic blunder.”

Phillips apparently does not recognize the existence of moderate white working-class voters — many of whom voted for Barack Obama in 2008 and 2012 but decided to take their chances with Trump in 2016. Phillips lumps these voters in with conservative white working-class voters and then dismisses them as latent racists not needed for the Democrats to win elections in the future.

The Phillips message to the Democrats is simple: Brown (again, his word) people are your constituency; stop trying to appeal everyone.

Talk about judging someone by the color of their skin. Phillips and his many acolytes use skin tone as a direct proxy measure of someone’s attitudes, beliefs and behavior. Holy shit! Why is that not considered racism?! [Because its being done by a highly educated, well-meaning, New York Times-approved Democrat, you fool. By definition, liberal Democrats can’t be racist.]

As this blog has argued here and here, most African-American and Hispanic voters are qualitatively different from liberal Democrats. On average, these voters are consistently ‘centrists’ on issues such as national security, abortion and LGBTQ rights; and, frankly, don’t share the same values and experiences as the liberal elites Phillips envisions controlling U.S. politics for the foreseeable future. In many areas, African-American and Hispanic voter attitudes have more in common with the Republicans than with the Democrats.

For a deeper dive into the data, please check our earlier post (here), but two charts give evidence of the disconnect between liberals and minority voters.

After identifying ideological voter clusters from the 2016 American National Election Study (ANES), we find six types of voters: Left, Center-Left, Centrists, Libertarians, Center-Right, and Right.  All are comparable in size, each ranging from 14 to 21 percent of the voting population. When we look at the ethnic/racial composition of these six voter clusters, we see some interesting variation (see Figure 1 below). 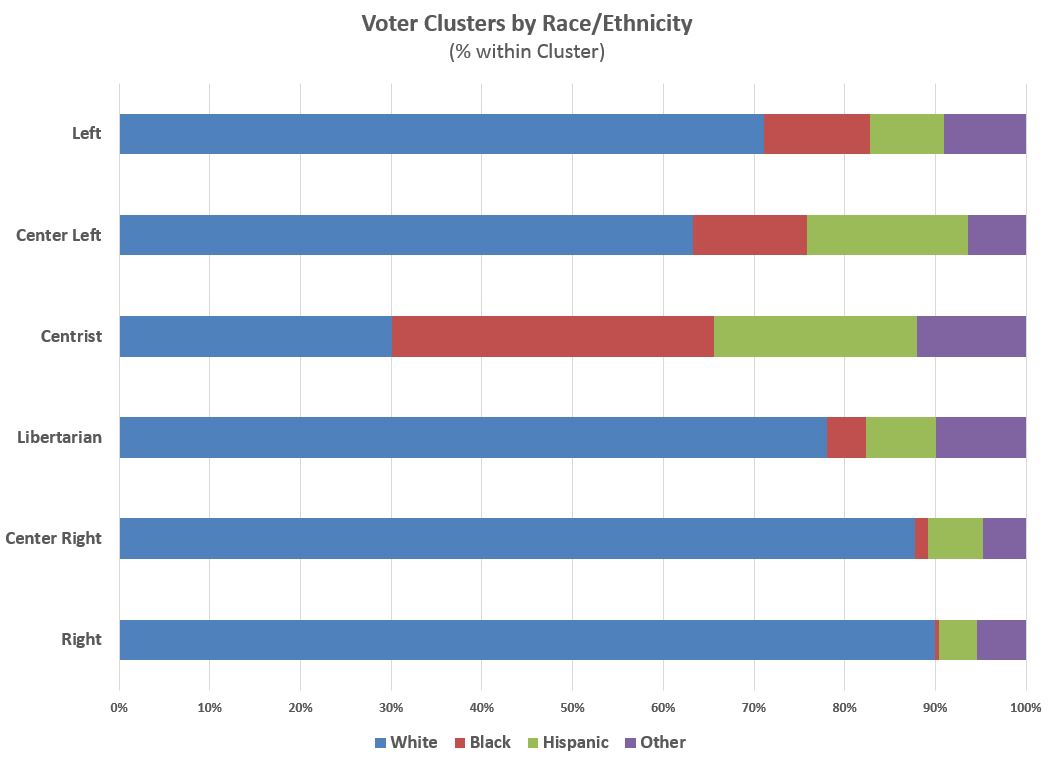 A plurality of African-American and Hispanic voters are Centrists — they are not ideologically on the Left. This has significant implications on the attitudes, beliefs, policy preferences, and voting patterns of many minority voters. Figure 2 shows the percentage of African-American and Hispanic Centrist and Left voters that supported Trump in the 2016 presidential race. 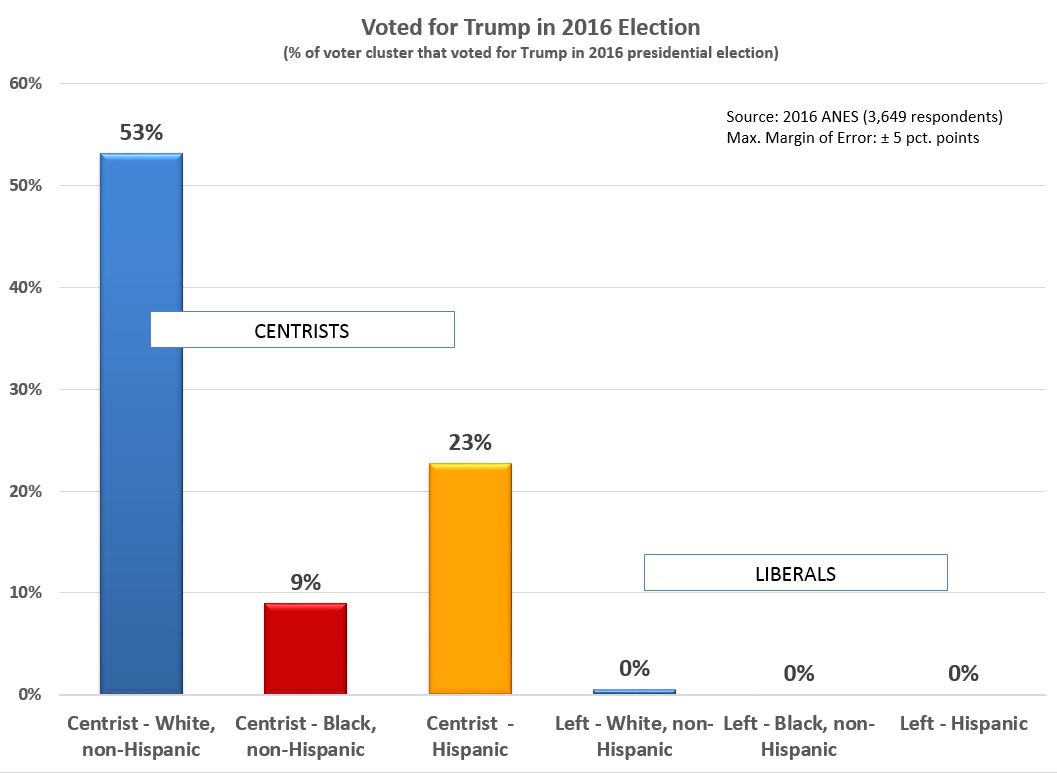 Nine percent of Centrist Black (non-Hispanic) voters chose Trump as did 23 percent of Centrist Hispanics. There were very few Trump voters within these racial/ethnic groups on the Left — in fact, less than 0.5 percent. While 9 and 23 percent might not seem like large percentages, the Democrats must ask themselves, could those numbers go up for the Republicans in future elections, particularly if the Republicans can leverage issues where Centrists are more aligned with the GOP than the Democrats?

What are those issues?  Figures 3 to 6 are just a few examples:

Figure 3: Percent saying abortion should never be allowed (by race/ethnicity and ideological cluster) 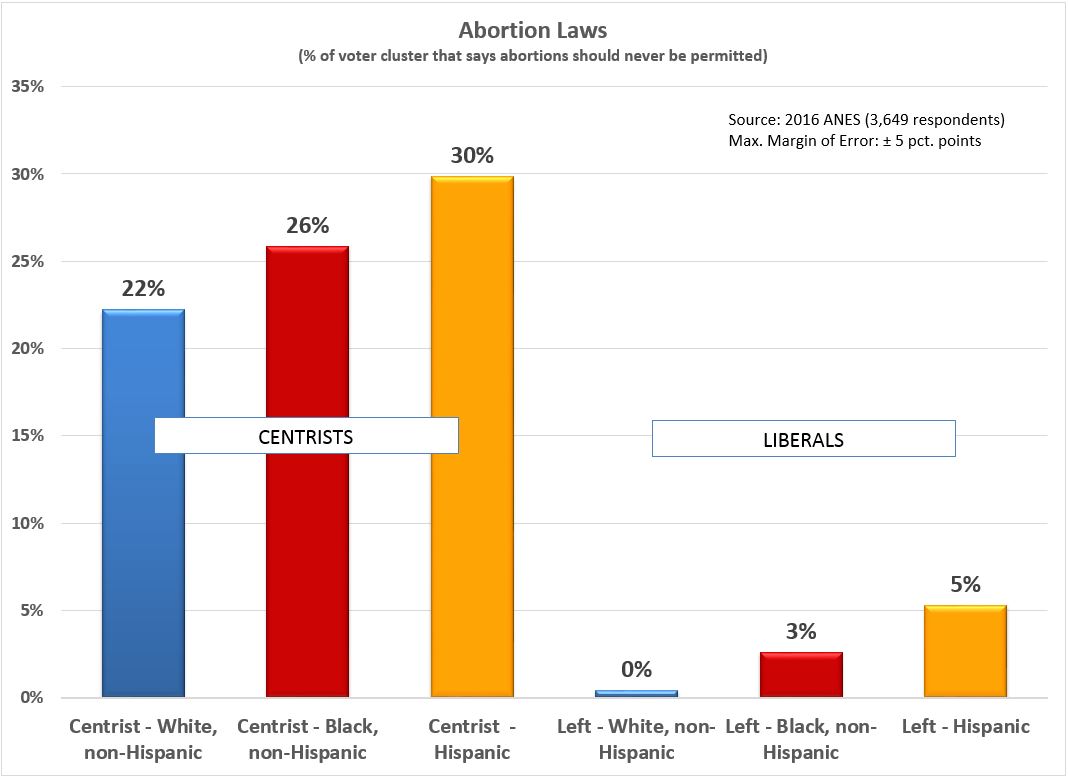 Figure 5: Percent feeling strongly that Transgender Americans should choose bathroom based on the gender they were born with (by race/ethnicity and ideological cluster) 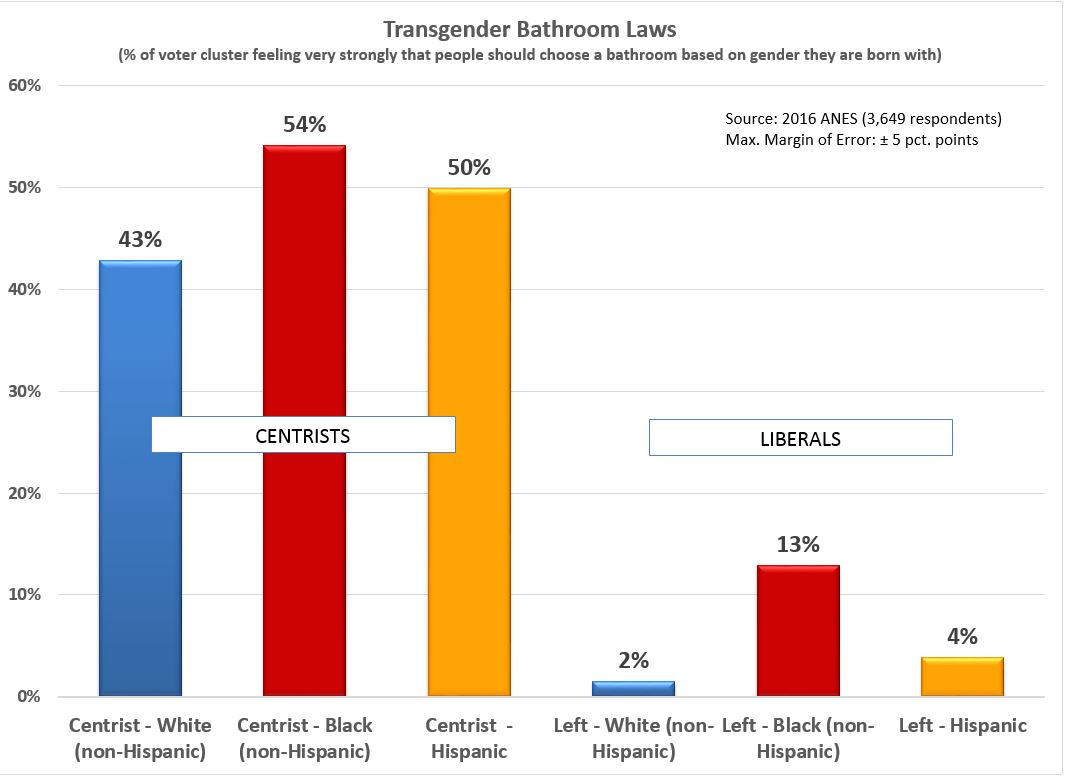 Figure 6: Percent agreeing “a great deal” to allow Syrian Refugees in the U.S. (by race/ethnicity and ideological cluster) 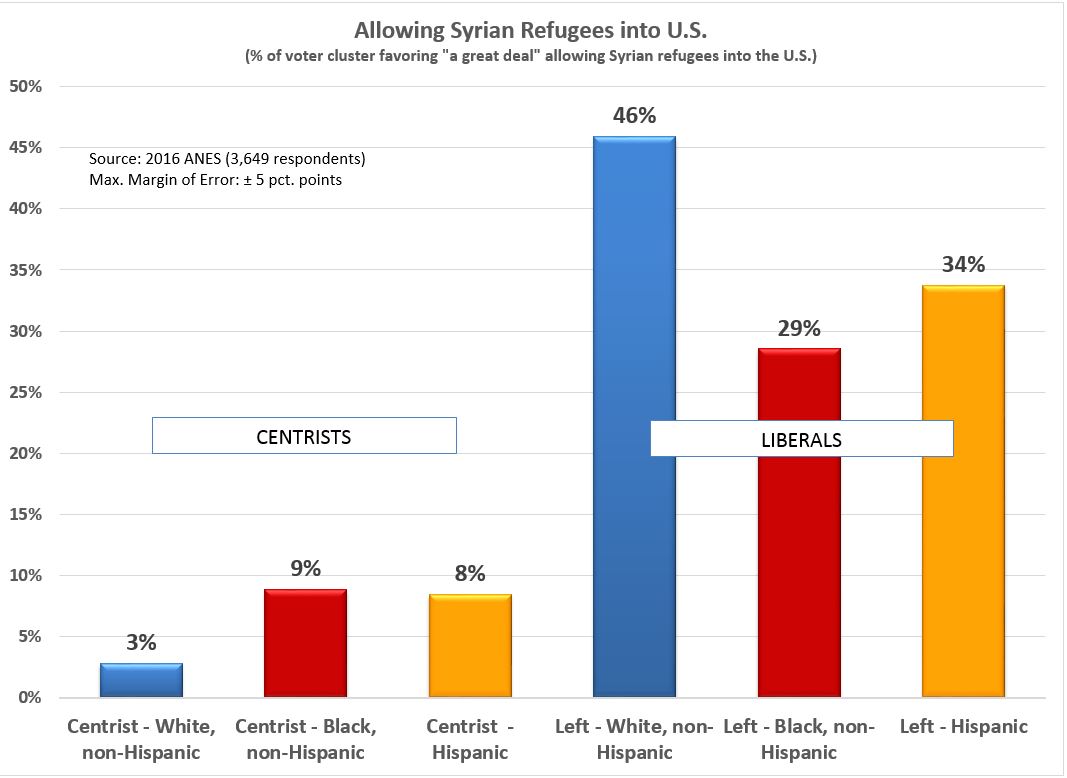 I can summarize these last four charts in one sentence: Centrists, which are a majority-minority segment of the American voting population, hold many different attitudes and beliefs from the ideological (mostly white) Left.

Minority-group Centrists are much more conservative on issues such as abortion, LGBTQ rights, and immigration from the Middle East. As yet, they are still very loyal to the Democratic Party in the voting booth. But can the Democrats assume this will be the case going forward?

I wouldn’t make that assumption.

It is important to remind ourselves about the depth of the problem the Democrats created for themselves. The litany of electoral losses detailing the Democratic Party’s decline have been repeated many times in the past eight months. Along with control of the U.S. Congress and presidency, the Republicans control both chambers of the state legislature and governorships in 24 states — compared to only five for the Democrats. But this is just one point in time. The Democrats’ decline in the state legislatures is a long-term phenomenon (see Figure 7 below).

Figure 7: Number of state legislators by party since 1936

To blame Nancy Pelosi or Barack Obama’s leadership of the Democratic Party is unfair and myopic. With the exception of two temporary spikes in their favor (1974, 2006), the Democrats have been losing state legislators since 1978.

Why the decline? Political observers propose many reasons. The New Yorker’s Noah Rothman suggests the Democrats suffer from a self-imposed radicalism that keeps the base happy but alienates the majority of voters. The Atlantic’s David Graham argues structural disadvantages hold the Democrats down (e.g., gerrymandering, campaign finance laws). The decline of unions and their voter mobilization efforts is another possible reason.

All are probable contributors to the Democrats’ decline,  but there is another possible reason: Long-term American economic prosperity has put more and more voters into an income bracket that may lead to their favoring lower taxes and less government — the bedrock positions of the Republican Party’s agenda.

As seen in Figure 1, the Democrats’  long-term decline in the state legislatures starts in 1978. In the prior 1976 presidential election, Ronald Reagan had challenged a sitting Republican president (Ford) for the party’s nomination. Though he failed, Reagan’s intra-party revolt led to the party’s explicit re-branding, usurping the dominance of the moderate Rockefeller wing of the party and replacing it with an ideologically conservative agenda focused on less government, more freedom, and a strong national defense.

The Republicans under Reagan didn’t move to the “center” — which is what many of the Beltway pundits suggested they needed to do — instead, they made a sharp turn to the right.

Like it or not, that message works. But does this suggest the Democrats need to act analogously and resist calls to move to the “center”? Instead, should the Democrats make a clear shift to the left and endorse progressive policies similar to those promoted by Bernie Sanders in his 2016 presidential campaign?

It is interesting that the new Democratic slogan ignores civil liberties, suggesting that this battle continues within the party’s leadership ranks.

Does that mean the Democrats need to become more ‘centrist’ if they want to compete more effectively with the Republicans? Hell yes! If their goal is to win elections on a more consistent basis, that is.

The now classic Saturday Night Live skit with Tom Hanks as a contestant (‘Doug’) on ‘Black Jeopardy’ was funny because of that well-known reality. And if Democrats want to find the next durable political coalition in this country, they are better off listening to Keeley, Shanice and Doug than anything coming from Phillips’ data analyses or Tom Perez’ Democratic National Committee.

If Rand Paul and his libertarian, non-interventionist cohorts could find a way to accept the legitimacy of government interventions to ensure equal access for all Americans to the ‘American Dream’ and concomitant protections from its vagaries, we might see the rise of a profound and enduring political majority.

But Steve Phillips doesn’t want THAT Democratic majority coalition because it would require real compromise, particularly on the economic and social issues that have been hard-coded into the Democrat’s liberal core as being the essential elements of political enlightenment.

The liberal brain trust with whom Phillips associates, clustered in our coastal metropolis’ and living in socially-approved, class-based segregated communities, think they know enough about working-class whites to know they don’t want them in their ruling coalition.

It didn’t help the DNC’s finances by recklessly pouring $22 million into a Georgia U.S. House race. Tom Perez’s obscenity-laced tirades against Trump have failed not only to energize the Democratic base, it has turned off donors to the party. Just watch this video of Tom Perez “energizing” the base. The painful look on the faces of those kids standing behind him, forced to listen to his meandering screamfest of a speech, says it all.

Where should the Democrats go from here?

Phillips and other “Turn Lefties” promoting the letting go of white, working-class voters from the Democratic coalition think they doing the equivalent of Reagan’s ideological revolt in the mid-1970s. They are not.

Reagan’s conservative agenda moved TOWARDS the majority of Americans, not away. Reagan had a coherent, empirically-supported organizing theory (‘free markets’) behind his candidacy. Apart from assuming all white, working-class voters are ‘racists,’ the “Turn Lefties” have no guiding principles. For them, it all comes down to assigning voters into ethnic and race categories and adding up the numbers.

The problem is that this strategy works for the Democrats when they run a charismatic, centrist presidential candidate (Bill Clinton, Barack Obama), but fail spectacularly when they run Left-leaning or uncharismatic candidates (Walter Mondale, Michael Dukakis, Al Gore, John Kerry, Hillary Clinton).

By keeping their wallets closed (for now), the Democrats’ big donors are sending a message to the DNC. The endless deluge of Tom Perez and Keith Ellison emails begging them to “save the Resistance and our democracy from the treasonous Donald Trump.

Everyday, like the big Democratic donors, rank-and-file Democrats are rejecting the breathless hype of their compatriots on the Left. American companies are as profitable as ever, American air and waterways have never been cleaner, ISIS is almost defeated and the slightly warmer weather means more available weekends at the nearest beach or park. But despite these good news items, there is still a lot of problems in this country (income inequality, access to health care, deteriorating infrastructure, college costs, etc.) that are often exacerbated by Republican policies.

The Democrats need a new message, a new brand strategy, and new leaders (Other than that, they are in good shape!). But writing off white, working-class voters is not a step in the right direction, even if this group’s numbers are in relative decline. By ignoring these voters, the Democrats may also push out core Democratic voters from other race and ethnic categories — and the Democrats can’t afford to do that.

The 2016 ANES dataset, data dictionary, and computer codes (SAS JMP) used in this article are available upon email request to: kkroeger@nuqum.com