That’s the tagline for TikTok, the video-sharing social networking service owned by ByteDance, a Beijing-based internet technology company founded in 2012. Its users are able to create 3 to 60 second videos, often including simple special effects designed to attract viewers and encourage broad-based sharing across the platform.

It sounds innocent enough, right? Unfortunately, in the hands of regular people, its frequently a dumping ground for some of humanity’s worst instincts and obsessions.

Along with similar social media services — such as Instagram — TikTok has become an attractive landing spot for millions of mostly unfunny (frequently obscene) amateur videos. It’s a cesspool of self-indulgent nonsense.

In other words, a perfect reflection of today’s popular culture.

Its the latter case that provides the indirect subtext to this year’s most controversial film, Cuties–-a French film currently available on Netflix. According to the internet-based entertainment service, the film is a “coming-of-age” story about an 11-year-old French-Senegalese girl, Ami, who must deal with the combined stresses of her father bringing a second wife into her home (her family is Muslim), coping with the pressures of a being a pre-teen in a new school, and a growing awareness of her burgeoning femininity.

With that description, you might think Cuties is something you’d find on The Disney Channel. However, if you thought that, you would be very wrong.

Congresswoman Tulsi Gabbard (D-HI) recently posted her opinion of the film on Twitter: 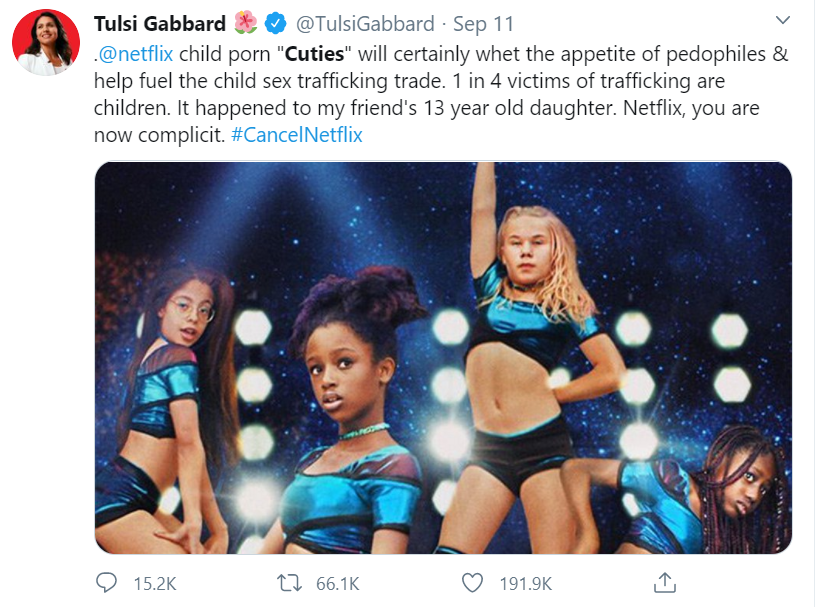 Gabbard is not alone in that opinion. Texas Senator Ted Cruz recently sent a letter to U.S. Attorney General William Barr asking for the U.S. Justice Department to investigate the production of Cuties and Netflix’s distribution of the film, writing:

“The film routinely fetishizes and sexualizes these pre-adolescent girls as they perform dances simulating sexual conduct in revealing clothing, including at least one scene with partial child nudity. These scenes in and of themselves are harmful. And it is likely that the filming of this movie created even more explicit and abusive scenes, and that pedophiles across the world in the future will manipulate and imitate this film in abusive ways.”

In other words, Cruz is concerned that, in addition to the finished product itself, child abuse may have occurred during the filming process. What was left on the editing room floor? And what did the director and producers do to elicit these behaviors from underage girls?

If I were answering the latter question, I’d say spend 30 minutes on TikTok and you’ll find almost all of those dance moves in Cuties (“twerking” being just one example) openly available for imitation by young girls all over the world. A director doesn’t need to teach today’s young girls how to dance like this, they already are.

That is essentially the line of argument the movie’s director, Maïmouna Doucouré, offered in her recent Washington Post editorial piece:

I was at a community event in Paris a few years ago when a group of young girls came on the stage dressed and dancing in a very risque way. They were only 11 years old, and their performance was shocking. Curious to understand what was happening on that platform, I spent the next year and a half interviewing more than a hundred 10- and 11-year-old girls across the city.
The result was my movie “Mignonnes,” or “Cuties” in English. I wanted to make a film in the hope of starting a conversation about the sexualization of children. The movie has certainly started a debate, though not the one that I intended.
Puberty is such a confusing time. You are still a child, with all that wonderful naivete and innocence, but your body is changing, and you’re self-conscious and curious about its impact on others all at the same time.
The stories that the girls I spoke to shared with me were remarkably similar. They saw that the sexier a woman is on Instagram or TikTok, the more likes she gets. They tried to imitate that sexuality in the belief that it would make them more popular. Spend an hour on social media and you’ll see preteens — often in makeup — pouting their lips and strutting their stuff as if they were grown women. The problem, of course, is that they are not women, and they don’t realize what they are doing. They construct their self-esteem based on social media likes and the number of followers they have.
To see these youngsters put so much pressure on themselves so early was heartbreaking. Their insights and experiences with social media informed “Cuties.”
And that’s why I made “Cuties”: to start a debate about the sexualization of children in society today so that maybe — just maybe — politicians, artists, parents and educators could work together to make a change that will benefit children for generations to come. It’s my sincerest hope that this conversation doesn’t become so difficult that it too gets caught up in today’s “cancel culture.”

Netflix has said pretty much the same thing: Cuties is social commentary AGAINST sexualizing young girls. This is a film about these pressures being experienced by young girls everywhere.

Both sides can’t be right. Can they?
I had no choice but to watch Cuties myself, with a stopwatch in hand (Yes, a stopwatch) and a pad of paper to jot down brief descriptions of the most problematic scenes.
Here are my impressions from the film…
First, there were only 6 minutes within the 96-minute film where I felt a line had been crossed by the filmmaker. One offensive scene in particular had the Cuties dance team performing sex acts while wearing minimal clothing. In other scenes, often cited by the film’s critics, an 18-year–old girl (portraying a 15-year-old) is briefly topless and at one point the movie’s protagonist, Ami, after being humiliated at school, takes a selfie of her private parts and posts them on social media (though no actual nudity is seen).
For what its worth, the most offensive scene for me was near the end of the movie when Ami pushes one of her dance team members into a river, nearly killing her, and walks away showing no obvious regret. Any empathy I felt for the character of Ami up to that point evaporated.
Still, to the film’s credit, it did make the filmmaker’s opinion clear that Ami’s membership in the Cuties dance group was not, ultimately, a positive and empowering outlet for her.  After breaking down into tears during a Cuties on-stage performance and running home,  Ami is comforted by her mother who protects Ami from an aunt’s judgmental rant about Ami’s dance clothes. In the end, Ami is not forced to attend her father’s wedding to the second wife and, instead, puts on jeans and a t-shirt and goes out to play jump rope with friends.
Despite the movie’s offensive moments, my immediate impression of the film was, in fact, that it was a solid critique about the over-sexualization of young girls today, particularly the traumatizing impact it can have for girls growing up in traditionally conservative communities.
Yet, I had a lingering negative impression as well. The legitimate message of the film cannot be wholly detached from the offensive scenes in the film.
Are Gabbard and Cruz right, or is the director’s defense of the film on firmer ground? I despise censorship and will 99 times out of a 100 err on the side of freedom in such debates.
But I’m struggling to do it this time.
Forget the twerking in Cuties for a moment. Imagine if the movie had instead been a strident attack on sexual abuse against young girls. Just because young girls are sexually abused every day somewhere in the world doesn’t mean you can make a movie graphically showing young girls getting sexually abused.
Children must be protected–including protection from filmmakers with otherwise good intentions.
But Cuties didn’t have any explicit sex scenes, only implied sex–and even then the girls were clothed. Isn’t that fundamentally different from child porn?
I genuinely don’t know.
Keeping in mind that I am not a lawyer, let us look at actual U.S. law and how it addresses child pornography.
According to the U.S. Justice Department, “Images of child pornography are not protected under First Amendment rights, and are illegal contraband under federal law. Section 2256 of Title 18, United States Code, defines child pornography as any visual depiction of sexually explicit conduct involving a minor (someone under 18 years of age).  Visual depictions include photographs, videos, digital or computer generated images indistinguishable from an actual minor, and images created, adapted, or modified, but appear to depict an identifiable, actual minor.  Undeveloped film, undeveloped videotape, and electronically stored data that can be converted into a visual image of child pornography are also deemed illegal visual depictions under federal law.”
The basic definitions of child pornography are contained in Section 2256 of Title 18 in U.S. Code: 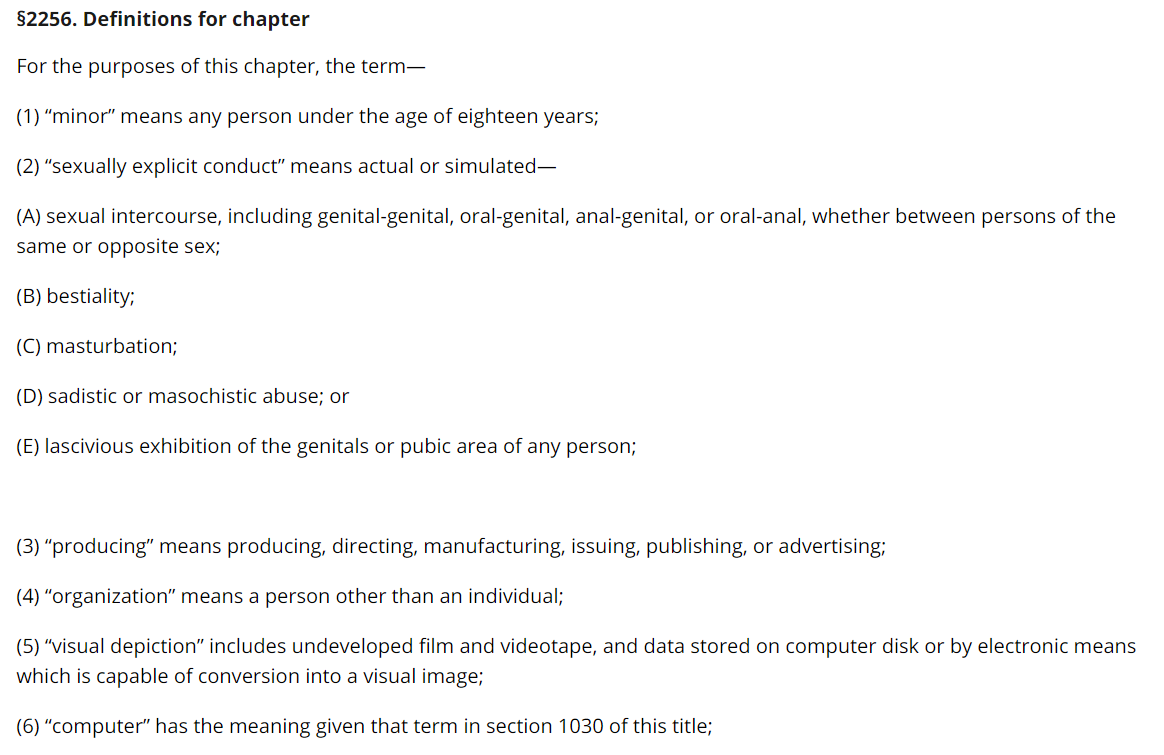 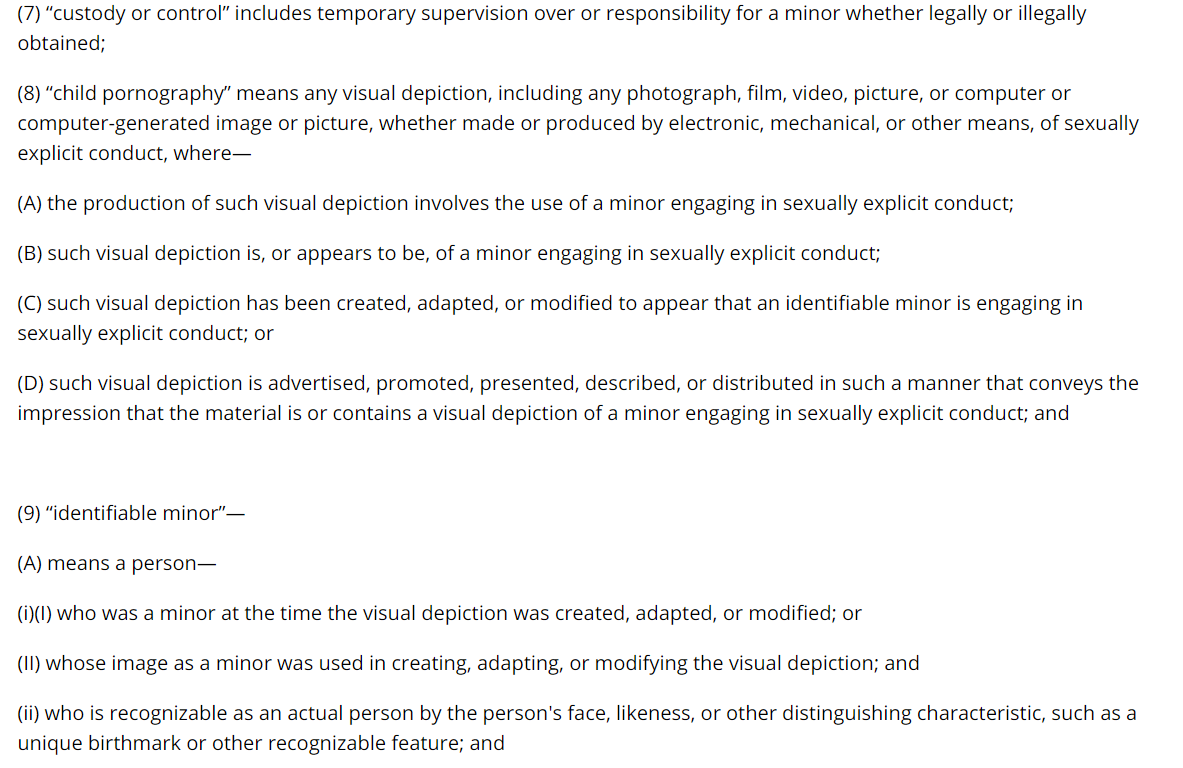 Given what I saw in Cuties, as a non-lawyer, I am drawn to the second line in Section 2256: “Sexually explicit conduct” means actual or simulated.
Is there any other way of describing the  most explicit dance scenes in Cuties than as a group of underage girls simulating sex.

As brief as those scenes were in Cuties, I’m reminded of the late Supreme Court Justice Potter Stewart’s definition of ‘pornography’ when I conclude: There are scenes in Cuties that look like child pornography to me.

Do we live in a country where the law allows adults to coach and direct children on how to simulate sex acts? I want to believe the answer is “No.” Its one thing that children learn of these behaviors through social media and mimic them on their own. It is entirely different — and far more disturbing— for an adult to participate in this process, regardless of their intent.

Doucouré understandably points out in her Washington Post editorial that Cuties was approved by the French government’s child protection authorities, but what is that endorsement worth? The the issue here is U.S. law, not French.
In a country that continues to force the imprisonment of Julian Assange, a publisher of whistleblower information that embarrassed the U.S. government, I do not believe free speech is alive and well in the U.S. today. To the contrary, it is under a daily siege, abandoned by a mainstream media complex that attends to financial bottom lines at the expense of the First Amendment.
Only an establishment tool believes the U.S. has fully protected freedoms of speech and press.
Nonetheless, I cannot abandon my tentative belief that Cuties may have crossed one of those few lines allowing the government to intervene in the censorship of a creative property.
Cuties was offensive, even as it offered an insightful critique of modern society and how hard it is for young girls to navigate our over-sexualized culture. These two beliefs are not contradictory.
I understand why some are defending this movie. But I also understand the outrage. It is legitimate and not powered by some QAnon-backed hate campaign. In my opinion, Cuties violates a common understanding of what constitutes child pornography.
Equally important, the controversy over Cuties is one our society needs to have and should not be short-circuited by a partisan, unproductive decent into slander and name-calling.
– K.R.K.
Send comments to: nuqum@protonmail.com
or DM me on Twitter at: @KRobertKroeger1